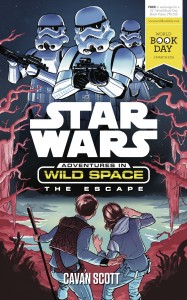 One of the 2016 World Book Day titles

Other books by Cavan in the Adventures in Wild Space Series