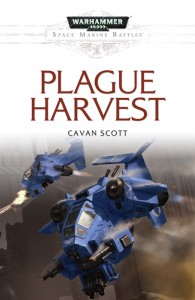 On the quiet agri-world of Orath, an ancient evil awakens. As the people of the planet sicken and the crops fail, Librarian Vabion of the Ultramarines, castellan of Fort Kerberos and guardian of Orath’s secrets, must work with his uneasy allies from the Doom Eagles Chapter to discover the source of the contagion and end it. But when the plague’s victims start to rise again and the architects of Orath’s fate are revealed, Vabion must stand alone against the darkness.