You can’t keep a good rabbit down, or even… Jaxxon.

Not only does Rabbit Hunt team Jaxxon up with Luke, Han and Chewie, it also pits him against bounty hunter, Dengar!

Framed for a crime he didn’t commit, Jaxxon finds himself at odds with the Empire, the Rebellion, and his ex-partner Amaiza Foxtrain! Co-starring Luke, Leia, Han, and Chewie in the days leading up to The Empire Strikes Back! Plus, an all-new tale of everyone’s favorite droid  bounty hunter from The Empire Strikes Back—IG-88! (With apologies to 4-LOM.)

Art in the story is by Francesco Gaston, with colours by Charlie Kirchoff and letters by Neil Uyetake, with that back up story by the wonderful Nick Brockenshire.

So, little bit of trivia: this issue was supposed to come out a while back and would have revealed Jaxxon’s surname, but because of delays that honour went to From A Certain Point of View: The Empire Strikes Back.

It also features the first Star Wars alien that I designed…sorta… More on that soon.

In the meantime, check out our awesome cover by Mauricet and a special preview.

Star Wars Adventures 2020 Annual is available from all good comic stores and digitally from Comixology now! 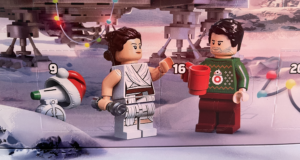