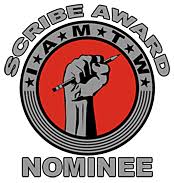 Very excited to say that my Warhammer Adventures middle grade novel Attack of the Necron has been nominated for a Scribe Award in the Young Adult & Middle Grade category.

The Scribe Awards are presented by the International Association of Media Tie-In Writers and represent excellence in licensed and tie-in publishing.

ORIGINAL NOVEL–GENERAL
The Bitterest Pill by Reed Farrel Coleman
Murder, My Love by Max Allan Collins
Murder, She Wrote: A Taste For Murder by John Land

Congratulations to my fellow nominees. The winners will be announced on July 15th.