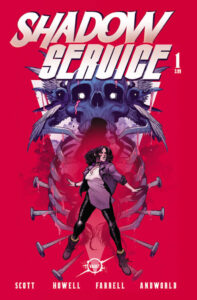 I grew up wanting to be James Bond. Which British kid of the 1970s didn’t? There was excitement, there were gadgets, there were exotic locations and dangerous stunts. But there was one thing that was missing… monsters.

You see, I also grew up loving monsters. Blame Doctor Who. Blame Hammer Horror. Blame a tatty copy of The Tomb of Dracula that I discovered in the local graveyard (yes, really. It was there, mouldering beside a grave. I don’t know who left it there. Perhaps I don’t want to know.)

The more I watched Bond, the more I became obsessed with the idea of spies fighting supernatural threats, an obsession that only grew when I finally saw Live and Let Die and witnessed 007 tussling with ‘the man who cannot die’.

Over time my love of Bond films morphed into other spy movies and shows. The Ipcress File.  Mission: Impossible. Obi-Wan Kenobi as George Smiley. And in comics, I lapped up the weekly adventures of a former KBG agent tracking Dracula through the streets of London in the criminally short-lived horror anthology, Scream. Again the arcane world of spycraft seemed the perfect fit for horror, both worlds brimming with dark secrets and strange rituals. And this was before I discovered that the first person to use the code-number 007 was occultist John Dee, Queen Elizabeth I’s personal sorcerer!

It was all those years ago, after watching The Omen one dark and stormy night, that I first scrawled down the name: MI666. It made me laugh. It still does. And for years I came up with story ideas for Britain’s shadow security service, protecting Queen and Country from things that go bump in the night. But I could never make them stick. I had characters: a sinister spy-master known only as Hex, a cursed infiltration agent who could never return to his old life… I even had the perfect antagonists in an infernal cabal determined to bring about hell on Earth, but I didn’t have my Bond, my 007.

I was still thinking about this years later, walking home from the cinema, airpods crammed into my ears. VCTRY’s cover of ‘Black Magic Woman’ shuffled its way onto one of my playlists and I realised I didn’t want a Bond at all. I didn’t want a blunt instrument, jaded after years in the field. I needed a new recruit, drafted into the service, someone who definitely wasn’t a team player, someone who didn’t know spycraft but… witchcraft. Gina Meyer was born. I hurried home, and all those years of storylines and influences flowed into the pitch that I immediately sent to Adrian Wassel at Vault. I knew he would fall under Gina’s spell and lose himself in MI666’s world of assassination, intrigue, betrayal and demons. And I was right. Shadow Service is the result, with issue one hitting comic stores 19th August, brought so vividly to life by that mistress of the dark arts, Corin Howell.

Writers are often told to write the stories they want to read. This is the story I feel like I’ve waited an entire lifetime to read.

And it’s only just beginning…