The first Warhammer Adventures books are now available in all good bookshops across the UK and North America.

My own Attack of the Necron kicks off the Warped Galaxies science fiction series while Tom Huddleston’s City of Lifestone launches the fantasy-based, Realm Quest. 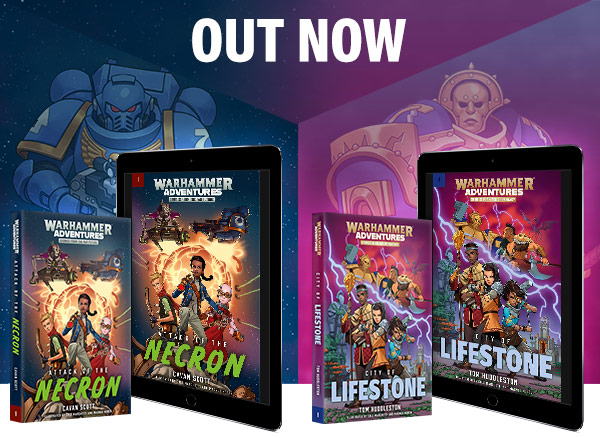 There are a number of ways to find out more about Warhammer Adventures:

>> The Teen Librarian asks us what we learnt writing both series.

>> Tom and I also turn up in a sponsored interview on Kirkus Reviews.

>> Issue 372 of The Phoenix features Attack of the Necron its book of the week. 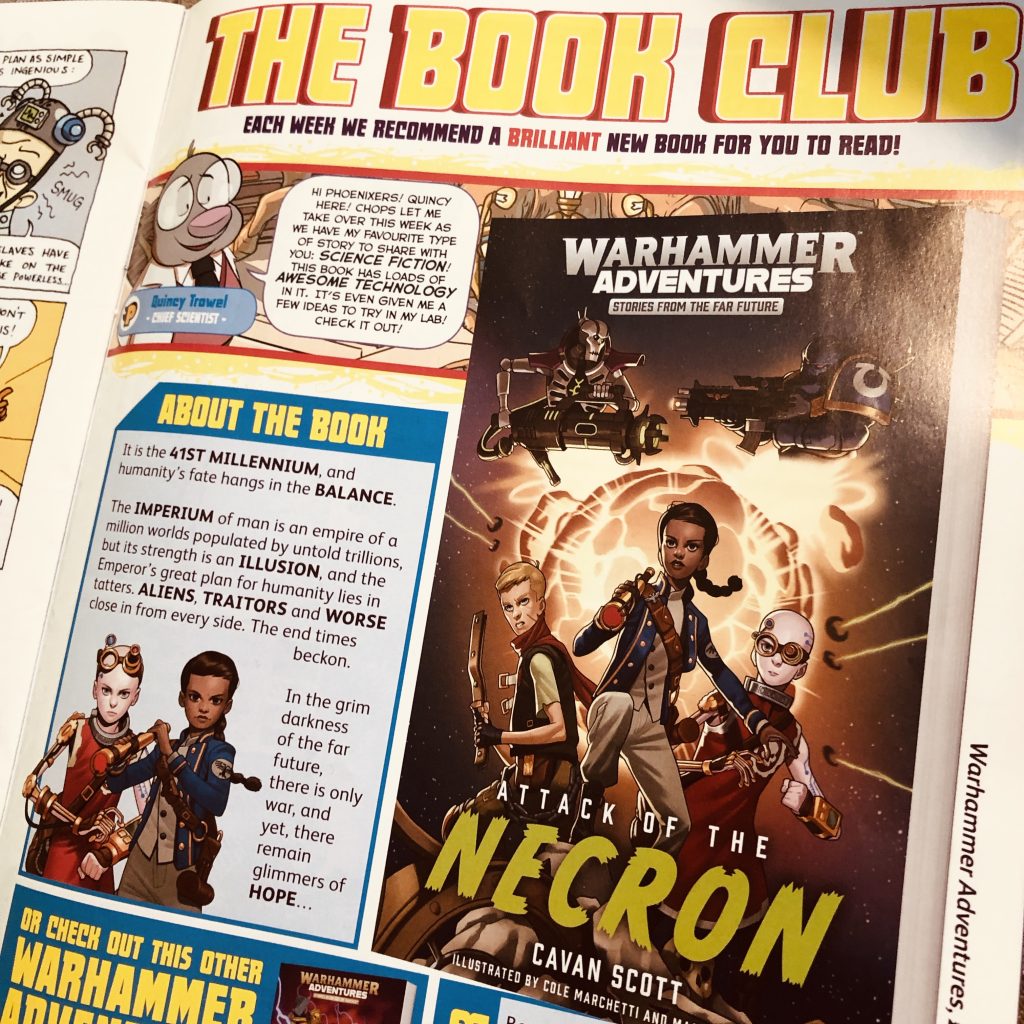 >> This week’s Toxic gives away a special flip-book that features extracts from both series. 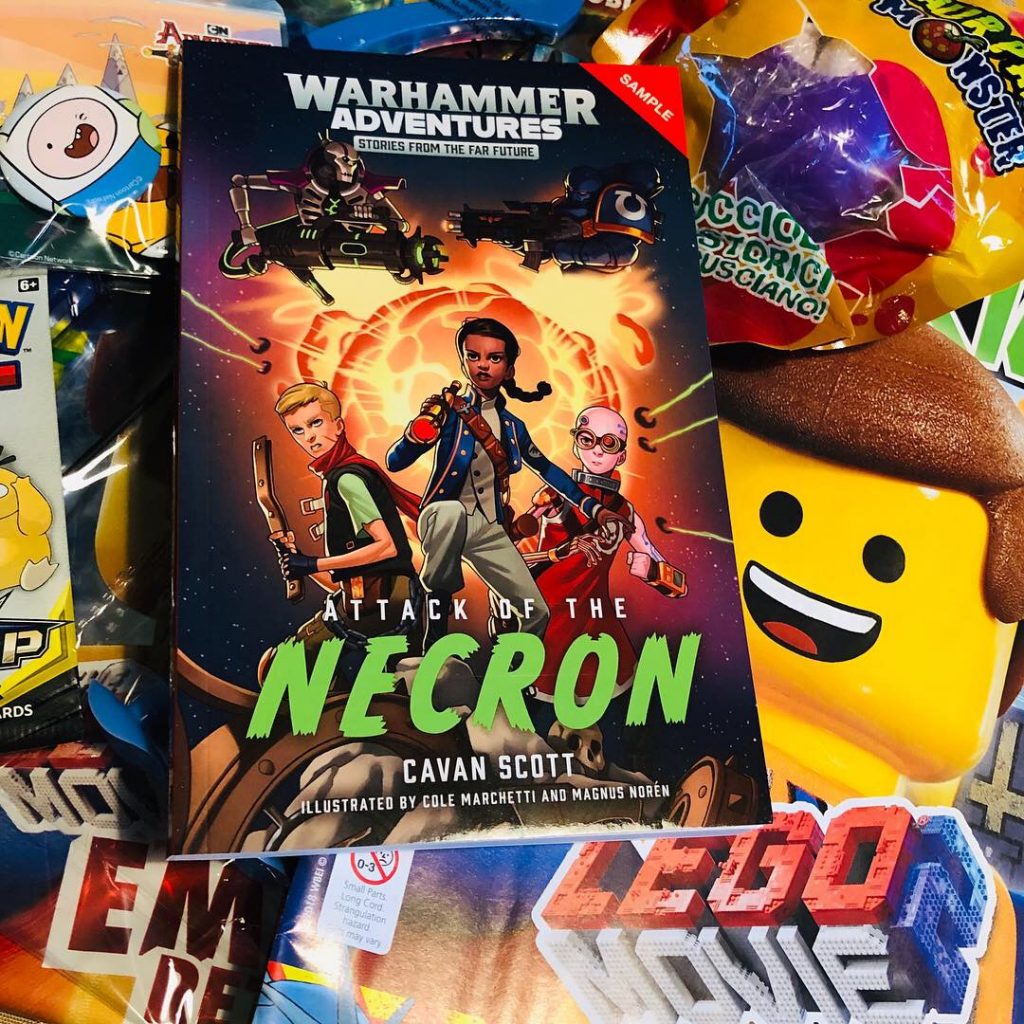 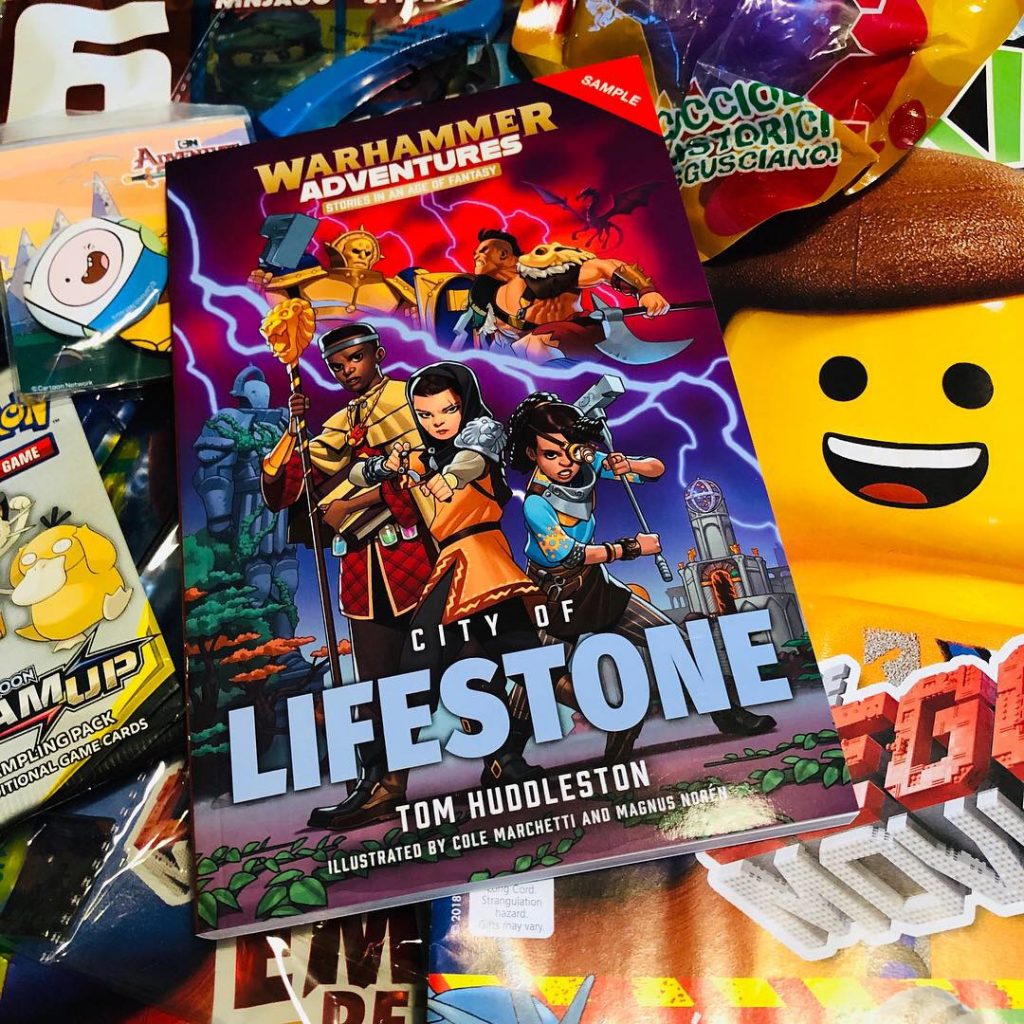 >> Tom and I are interviewed in the February issue of Games Workshop’s White Dwarf. 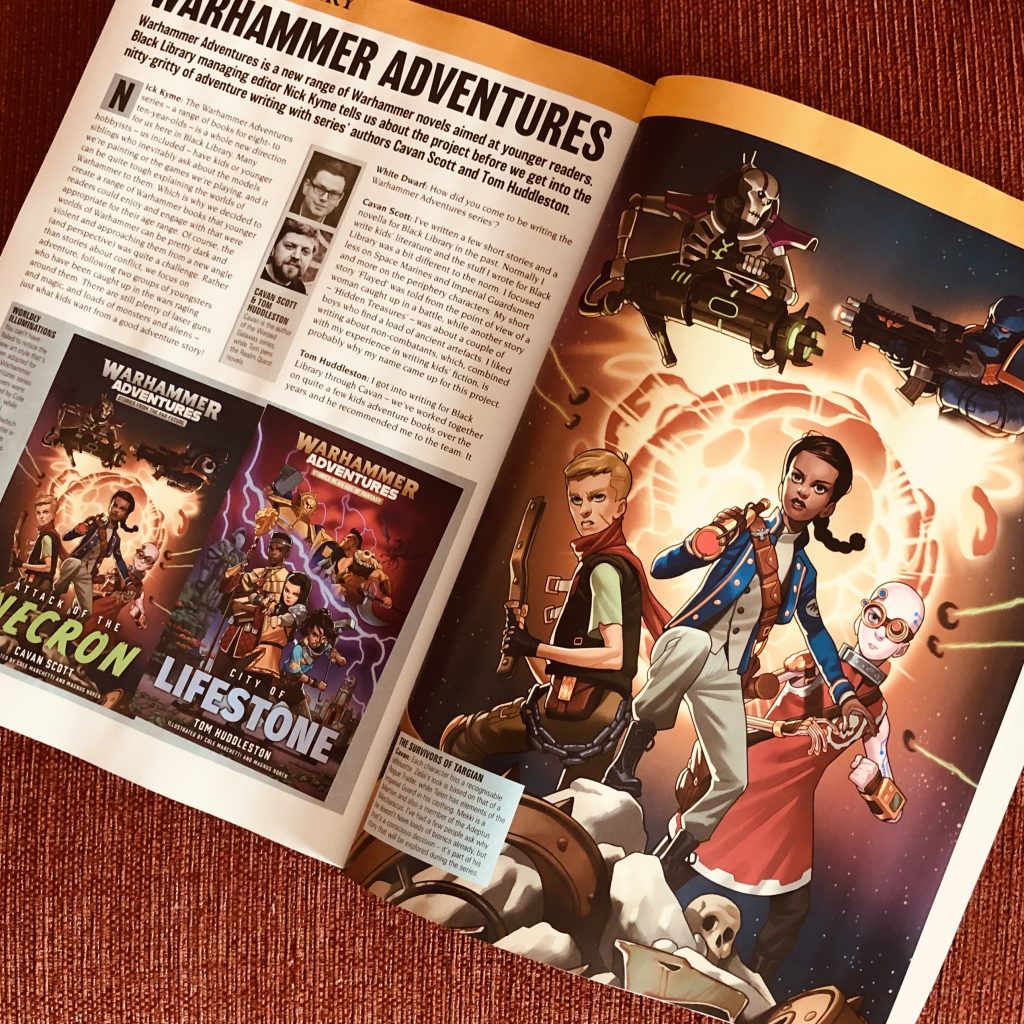 >> And we’re also interviewed in the latest issue of SFX. 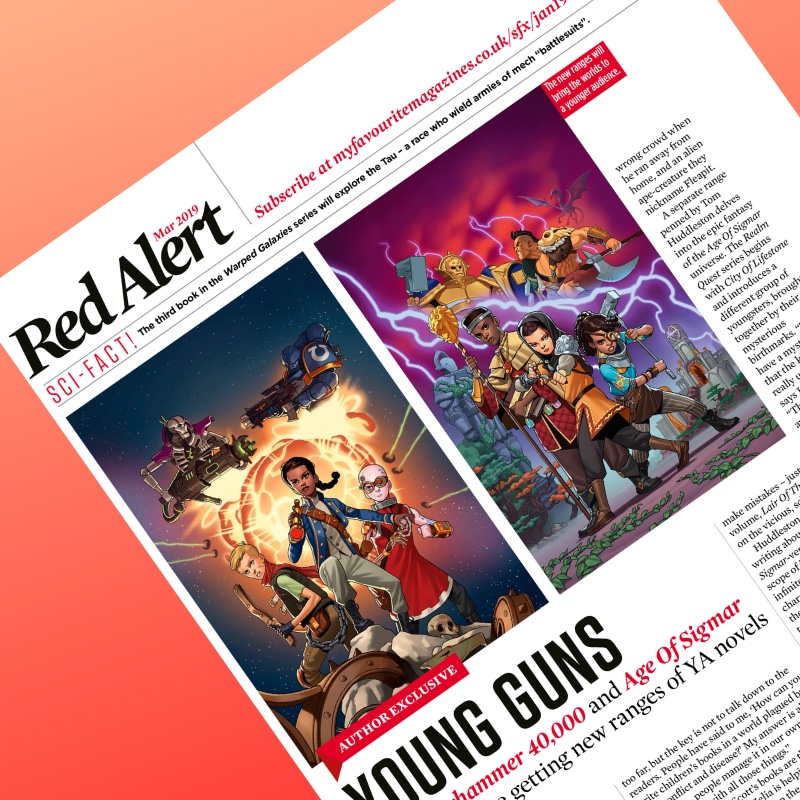 More coverage is on its way, so watch this space.

Attack of the Necron is available right now from all good stores including Amazon UK and Amazon US, Waterstones, WH Smith, Forbes, Black Library, Barnes and Noble, Powell’s, Books A Million and IndieBound.

And, of course, the junior novel also available as an amazing audiobook read by the Tenth Doctor himself, David Tennant! (Don’t forget, you can watch David talking about the book here!) 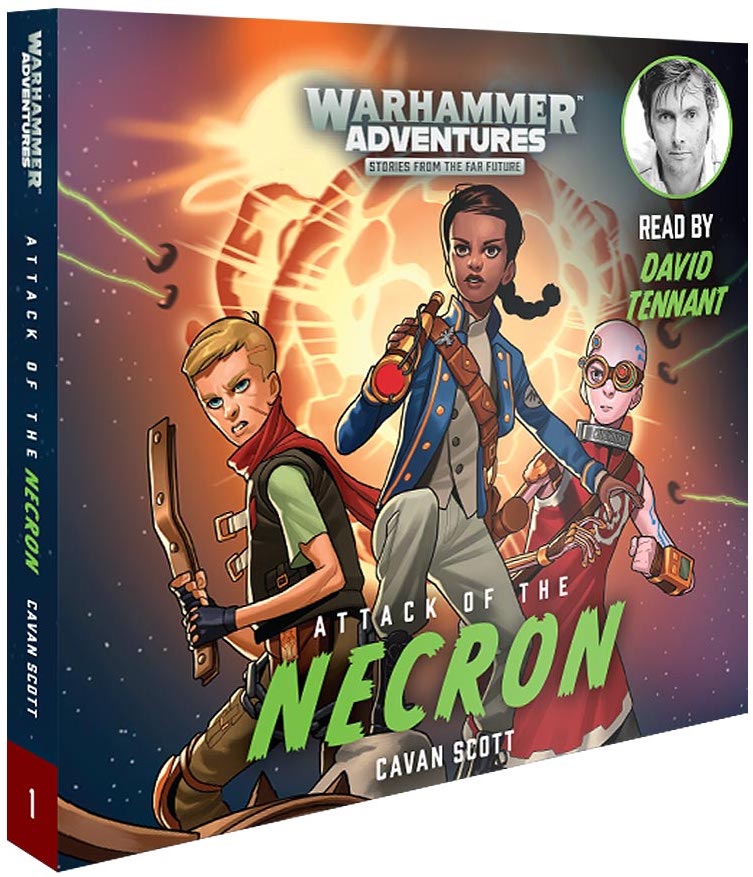 A new adventure begins in the far future! When her world is attacked by Necrons, Zelia Lor and a rag-tag group of survivors must fight to escape and reach the mysterious Emperor’s Seat.

READ IT BECAUSE:
It’s a brand-new and exciting way to experience Warhammer 40,000 and it’s designed to be the perfect starting point for younger readers.

THE STORY:
On the hive world of Targian, Zelia Lor helps her mother search for ancient tech, digging up treasures of the past on the wind-blown plains. They are happy. They are safe.

All that changes when the Necrons attack. Without warning, a host of robotic ships appear in the skies above Targian and rip the planet apart.

Separated from her mother, Zelia must escape the doomed world, her only hope a scrambled transmission promising safety at a mysterious place known only as the Emperor’s Seat.

Launched in an escape pod, she crashes on an icy wasteland far, far from home. But Zelia is not alone.

She is joined by a rag-tag group of survivors – the street-tough juve Talen, gadget-obsessed Martian boy Mekki and super-intelligent alien-ape, Fleapit.