Over the weekend, comic writer and editor, Alex Segura posed a question… 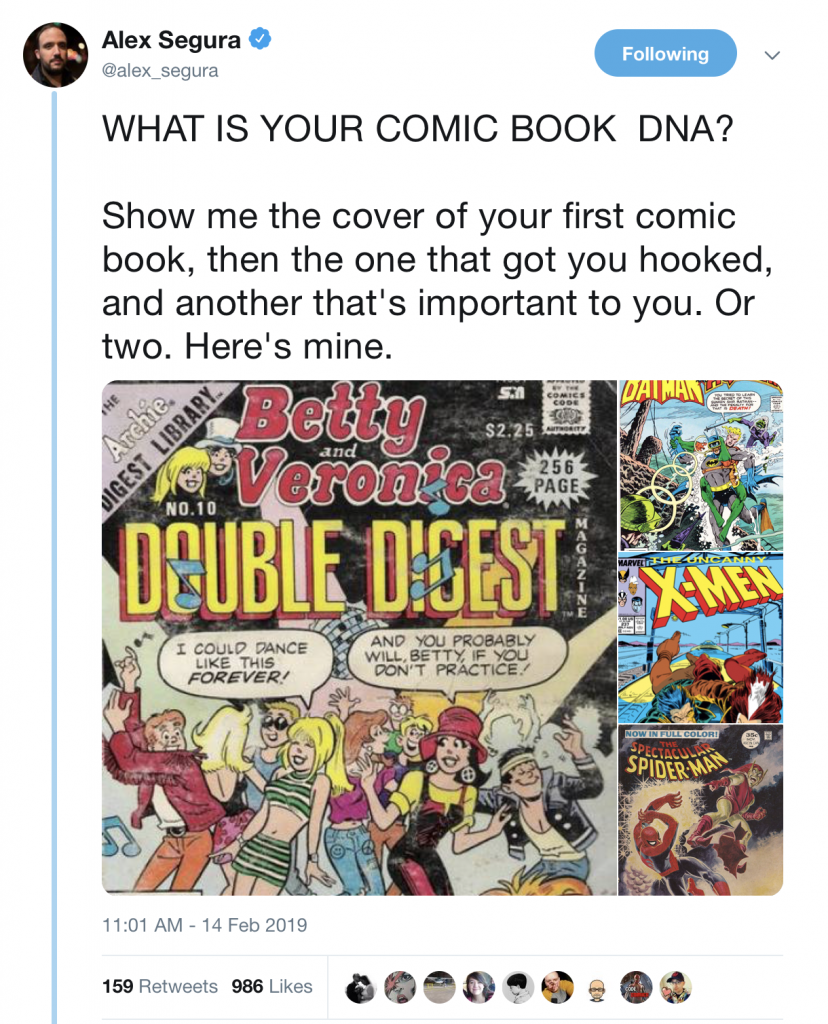 My feed lit up with everyone’s memories, inspiring me to join in. And boy, was it hard? You have to understand, I read a lot of comics growing up. My Mum and Dad indulged me with my hobby, my grandma slipping me extra pocket money whenever she could so I could pop to the newsletter, and then, when at school, we would read each other’s issues at break time.

This is what I eventually chose. They are not necessarily the first comics I read. In fact, I know they’re not, but they probably had the most impact on me.

So why are they there?

The Beano had to be included because growing up in the Britain of the late 1970s the weekly humour comic was king. I use to devour them, one after another. The Beano. The Dandy. Whizzer and Chips. Buster. Beezer. Whoopee! Old issues of Shiver and Shake and Monster Fun that I picked up at jumble sales. The list went on and on. So why the Beano? Because, it probably was the first of its kind that I read and definitely had the most impact.

Then there was Transformers. I fell in love with the toys as soon as I saw them and the cartoon soon after, but the comic? It was a saga I read from beginning to end, not knowing that Marvel UK were slipping in stories between the US editions to fill the weekly schedule. Yes, the robots were cool, but importantly they were characters that I really cared about. And at its heart was a SF mythology that I really bought into, an eternal war that spanned galaxies, and eventually time itself. It’s almost like Transformers was written especially for a skinny kid brought up on Star Wars and Doctor Who.

Everything shifted when I picked up the UK reprint of Marvel Super Heroes Secret Wars. I had never really been a super hero reader other than the back-ups strips in other Marvel UK series like the pre-mentioned Transformers and Star Wars weekly, but knew many of the characters from TV shows (especially Spider-Man and his Amazing Friends, which was a must-watch). I never really twigged that characters like Spidey and the Fantastic Four and the Hulk knew each other. I honestly don’t think I’d even worked out they were from comics at all. As far as I was concerned, they were in cartoons or films first and foremost. Secret Wars therefore blew my mind. Here they all were, together, along with a load of characters I’d never seen before. Wow. And yes, it was a big SF epic. I was hooked, not only by the main mini-series, split into weekly chunks, but especially by the back-up strip – John Byrne’s Alpha Flight. I honestly believe there is a generation of British fans who have a skewed opinion of how important Alpha Flight are in the Marvel universe. I knew their name long before I really knew the Avengers!

I became obsessed. Everything stopped when a new issue was delivered. In fact, here’s actual evidence… 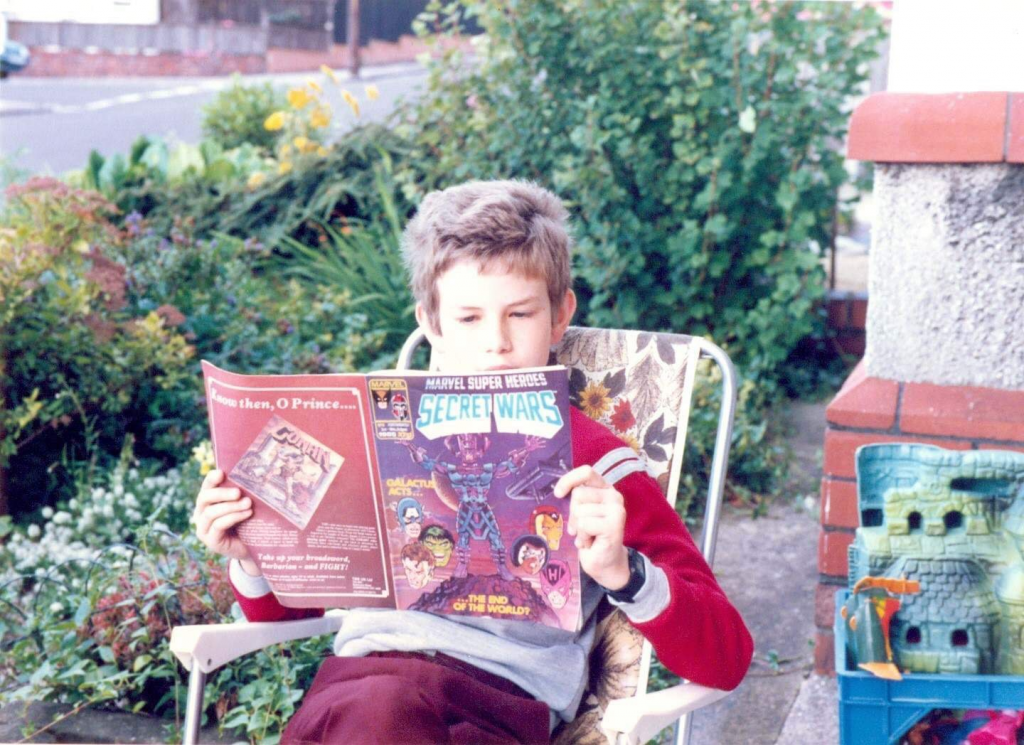 Notice how even Castle Greyskull has been shoved into a crate (landing on poor old Orko, it seems!)

Of course, the genius of Secret Wars was that they went straight into Secret Wars II with all it many, many, many tie-ins. Suddenly, we were introduced to just about every Marvel hero there was, the weekly becoming an anthology title. You’d have weeks when you’d be reading the Fantastic Four and then you’d be thrown into Iron Man, or Power Pack, or the X-Men. Talk about a gateway. Before long, I was seeking out, not just UK reprints, but the original issues, venturing into our local comic store for the first time and scouring second-hand shops where I found, not only more Marvel comics, but my first ever DC comic – DC Comics Presents #26, featuring a wonderfully pulpy Superman / Green Lantern team-up (I had no idea who GL was at the time) and the first ever Teen Titans strip as a back-up.

My love of American comic books was born of issue one of Secret Wars, and I cannot thank it enough.

Now, the problem with choosing four issues was that as soon as I posted the tweet, I immediately thought of other titles I should’ve included… 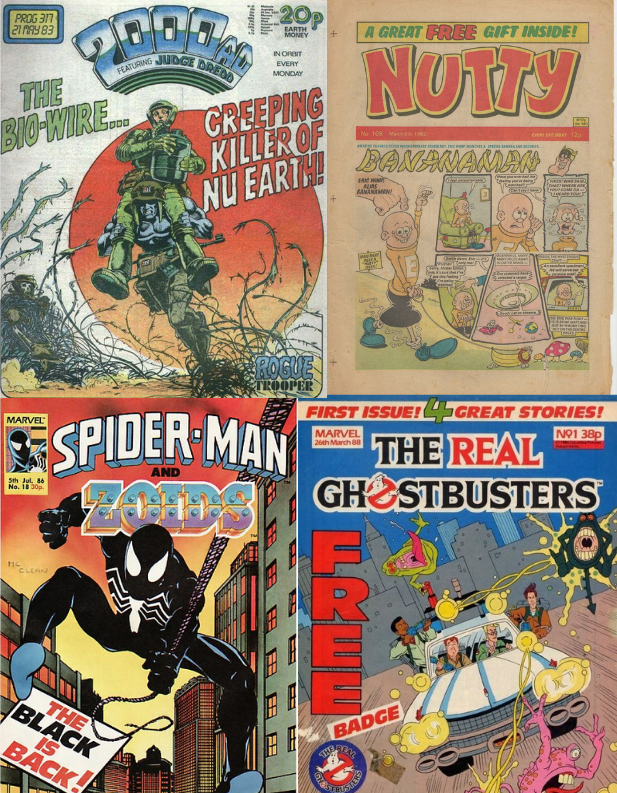 2000AD is an obvious choice for so many brits, a chance to level-up and read more sophisticated (and also, in many cases, more violent) stories than you could find elsewhere on the UK newsstand. And from the sublime to the ridiculous, you have Nutty, which for a while became my second favourite humour title next to the Beano itself. (I adored Bananaman!)

It’s no surprise that other Marvel UK titles crop up. Spider-Man and Zoids was another fave (and yes, Spidey’s black costume was a massive thing for me, thanks again to Secret Wars). I can’t remember much about Zoids, but Peter was the main pull. I think I still have a stack of those in the loft, alongside copies of The Real Ghostbusters which I remember still reading when I was way out of the target age-bracket, but that wasn’t unusual. Even when I had discovered the likes of The Killing Joke and Dark Knight Returns, I was still enjoying so-called kid’s comics as well. I’ve never fully grown up, and don’t intent doing so any time soon.

And once you start scratching the surface, you realise how important Marvel UK was. As I’ve said before, they introduced me to Star Wars long before I’d seen any of the films, expanded the good Doctor’s adventures, and continued my super hero education with characters created on both sides of the Atlantic. 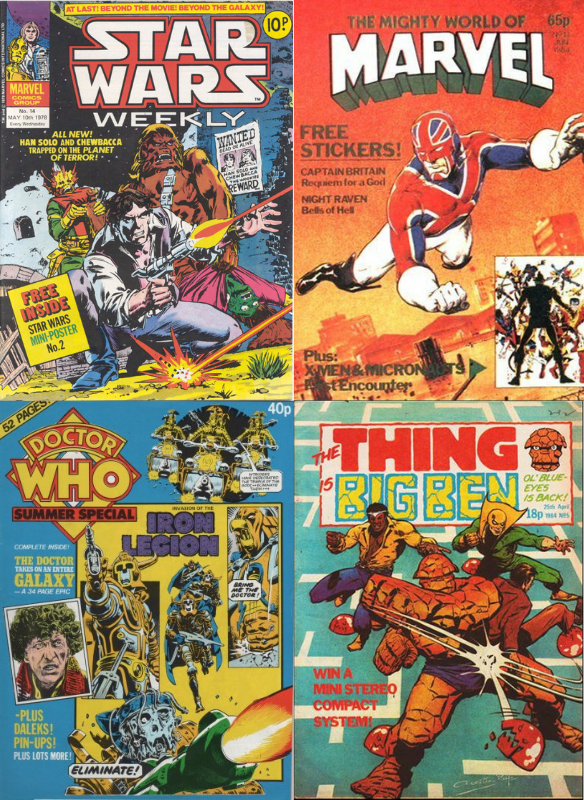 These comics have stayed with me for years, and moulded my career. Looking back at these covers, I realise how lucky I have been to write for so many of these characters, from Star Wars and Doctor Who to the Real Ghostbusters and the Beano (adding Buster to the list).

Perhaps I should use this page as a bucket list, ticking them off as I go.

But which will be next?