It’s hard to believe that SDCC was a week ago! The convention is Christmas for the comics industry. There are weeks, if not months, of preparation, and then it’s over in a flash!

This year was my busiest con ever, which meant that I didn’t actually get to see much of the floor itself or catch up with half the people I wanted to, but I didn’t manage to snap a few photos along the way which I thought I’d share with you.

I was travelling with my usual con compadre, Mr George Mann, which led to the inevitable selfies, including this little clink on take-off from Heathrow. 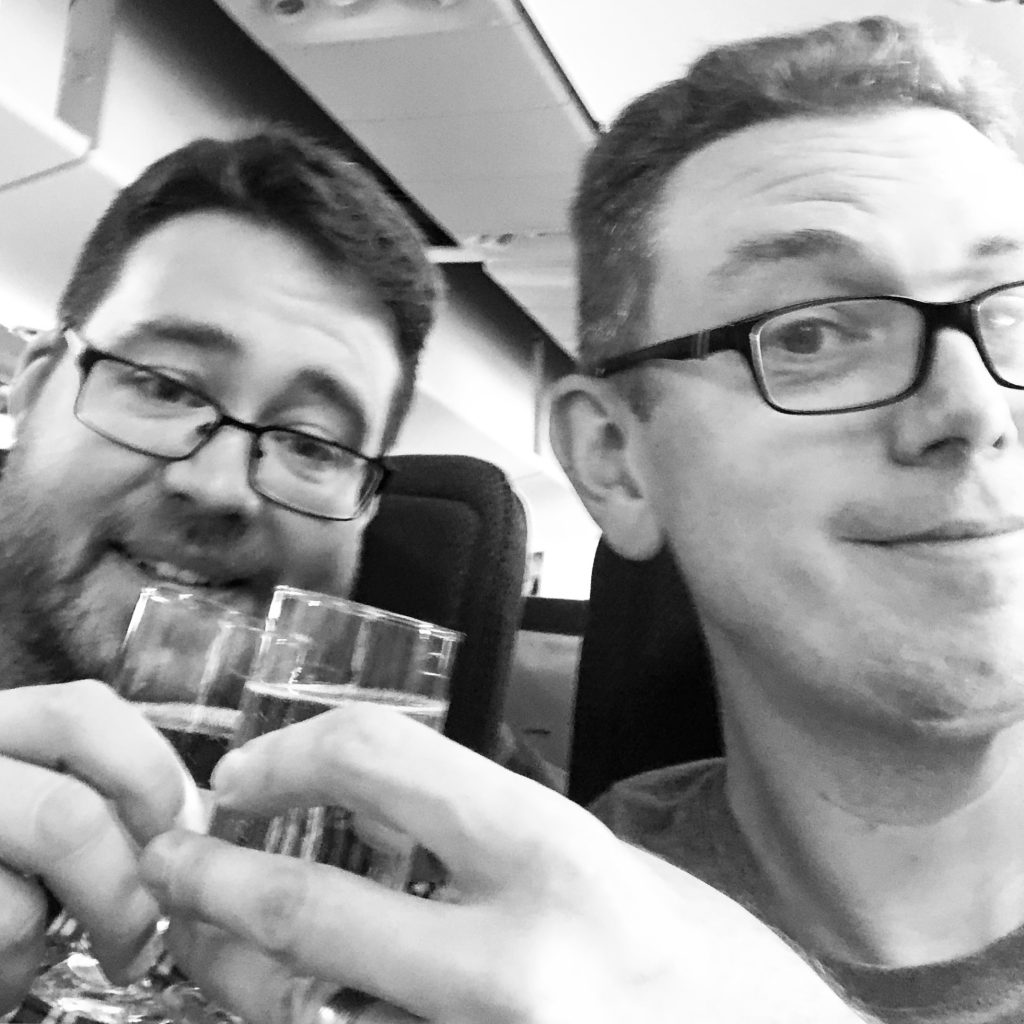 As you can see the flight was tortuous!

Our Wednesday was spent wandering and helping each other brainstorm plots and pitches. However, for years we’ve been meaning to get to Mysterious Galaxy, San Diego’s premier science fiction and fantasy book shop. We made it this year and it was like discovering Eldorado. 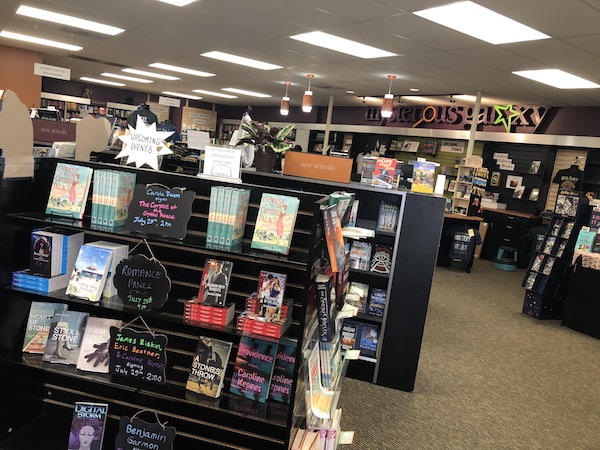 If you love SF, Fantasy, Crime or geeky stuff you have to go to Mysterious Galaxy if you’re ever in San Diego. We spent a ridiculous amount of time there, browsing the shelves and chatting to the awesome staff.

And yes, we left with our bags ladened with books and swag!

That evening was Preview Night and we made straight for our favourite booths, knowing how busy it would be over the next few days (not that Wednesday Night was light by any means. I’ve never known a Preview Night so crammed. The patented San Diego shuffle was in full vigour as we made our way slowly through the halls.)

Of course, there were the inevitable photo ops, from possibly the worst Kenner action figure of all time… 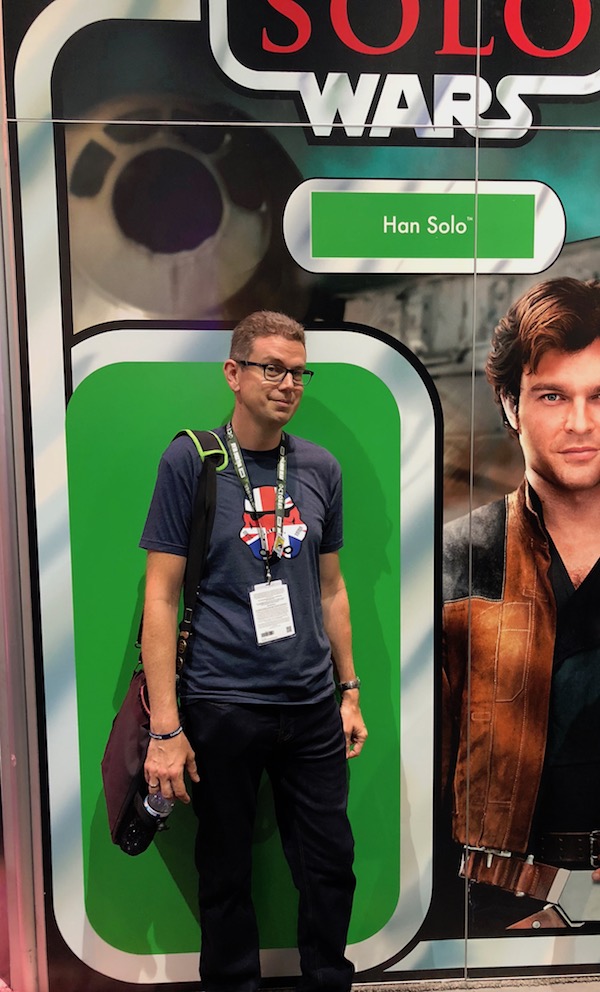 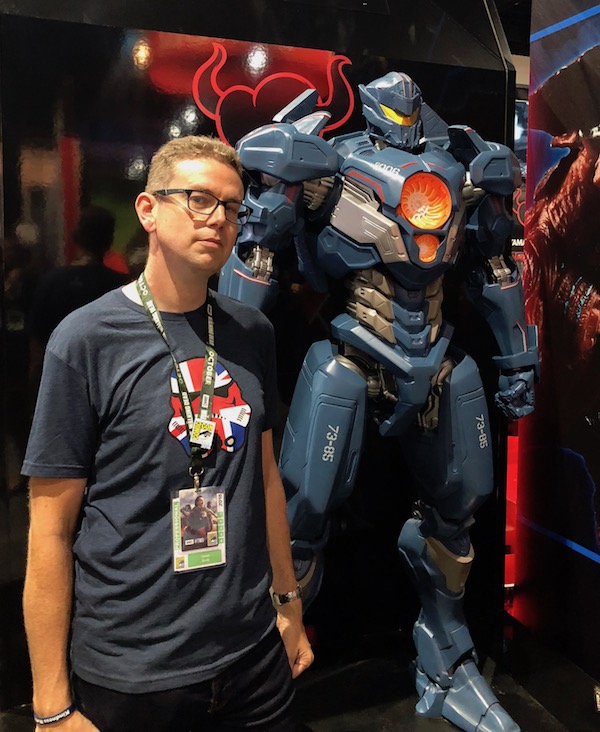 Now, Lucasfilm had the Millennium Falcon Experience on site, but unfortunately I spectacularly failed to get onboard everyone’s favourite heap of junk, but did make it onto the LEGO version instead. Punch it, Chewie… 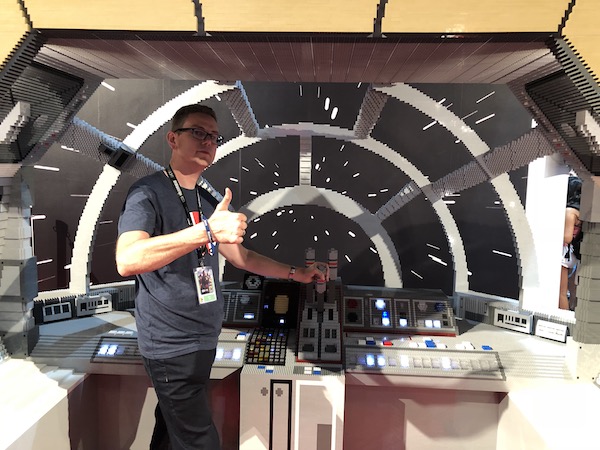 Talking of LEGO, a blocky Thanos was in session, delivering his verdict on the Universe, but there was no need to worry as the Doctor was also on hand to sort things out… 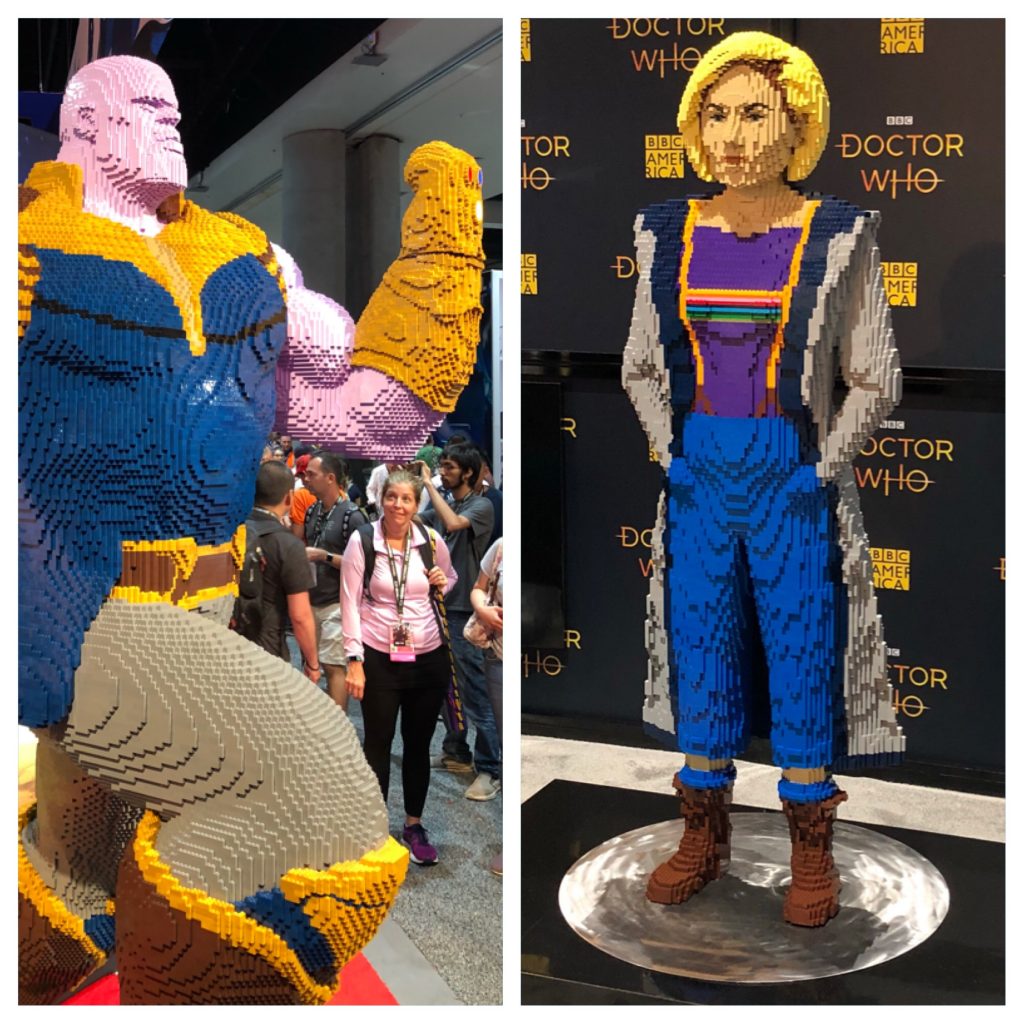 There was also plenty of costumes, especially at the DC booth, although the Shazam display was one that particularly caught my eye. 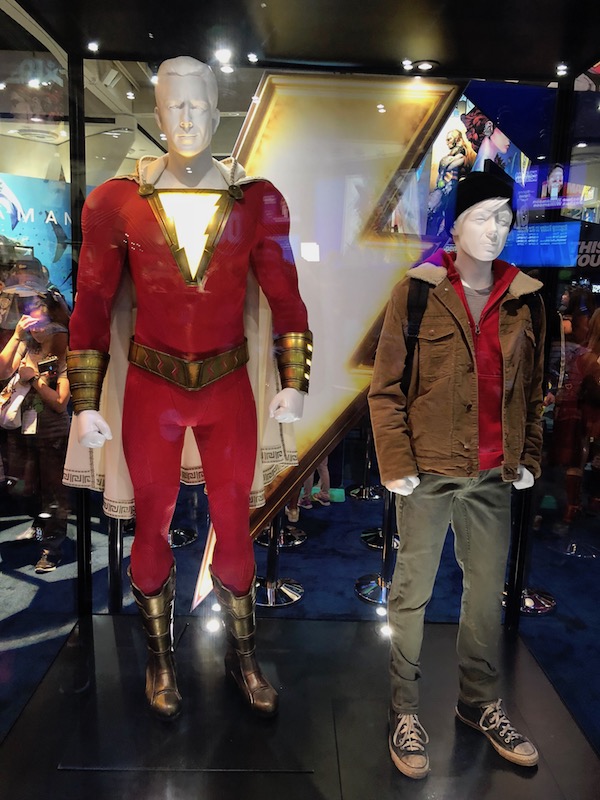 If you haven’t seen the trailer yet, you should – the movie looks great. Here it is, for your viewing pleasure:

Our brief wander of the hall complete, it was down to the main business of the con; signings and panels.

Then there were also signings for Doctor Who, Vikings and Tekken on the Titan Booth and DC Lego Super Hero signings on the DK Booth. Thanks to IDW, Titan and DK for looking after us throughout the show.

My panels started on Friday with Lucasfilm Publishing. The literary keepers of a Galaxy Far, Far Away treated us all to breakfast at the start of the day and it was great to finally meet some of the folk I’ve only ever talked to online. Here’s a snap of our early morning Star Wars summit…

The panel itself was a lot of fun, and included the announcement of my new comic mini-series Star Wars Adventures: Tales From Vader’s Castle.

There were also loads of other announcements of new projects, so make sure you check out Dan Brooks’ report of the panel which includes Elsa Charretier’s amazing cover for Star Wars: Choose Your Destiny –  A Luke & Leia Adventure. 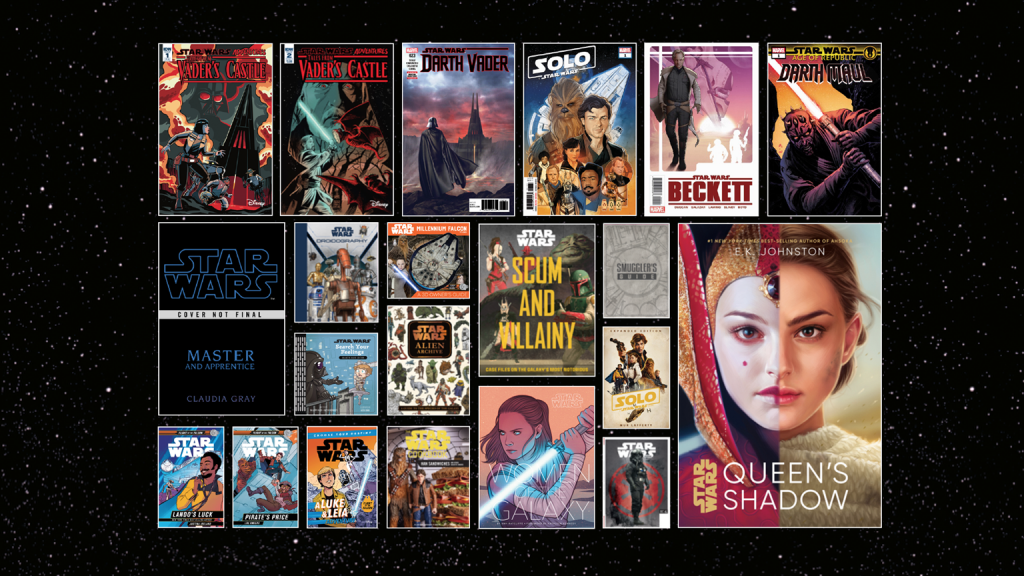 More details for Vader’s Castle were revealed at the IDW Big News Panel the following day (including the titles for the individual issues which I blogged on Friday). I was particularly pleased to be on stage as my friend Delilah S. Dawson was announced as the writer of IDW’s new Spider-Man comic, with art by Fico Ossio. 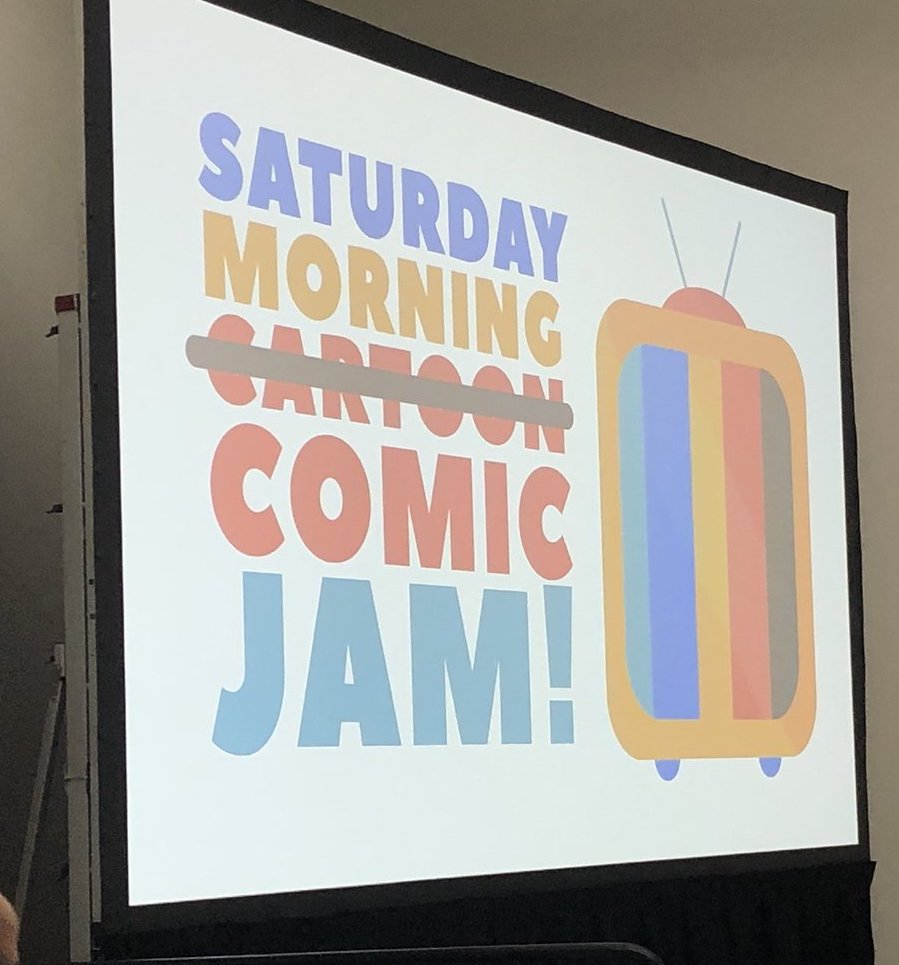 I also had a great time on the IDW Saturday Morning Cartoon Jam panel in which we taught an audience of eager kids (and parents) how to make comics.

I was on hand to talk about scripting, while Goosebumps writer and artist Jen Vaughn talked through covers and My Little Pony‘s Thom Zahler and Tony Fleecs were on hand to talk art. Ably moderated by IDW editors Denton Tipton, Elizabeth Brie and Chase W. Marotz, the session included a chance for panelists and attendees to finish a page of Teenage Mutant Ninja Turtle art.

Of course, I was slightly at a disadvantage as I was surrounded by brilliant artists. Here’s Jen Vaughn’s completed page, compared to my effort. 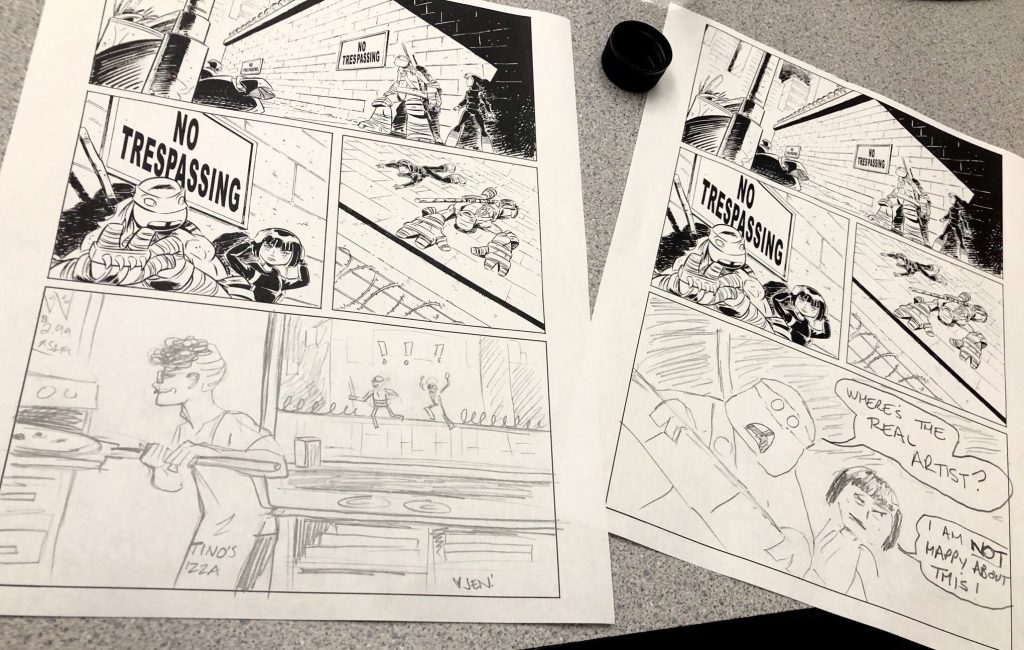 This is why I stick to scripts!

The panel, which included news of October’s Pacific Rim: Aftermath collected edition, was moderated by our wonderful editors Robert Napton and Nikita Kannekanti.

Then on Saturday, I popped up on Titan’s Road to the Thirteenth Doctor panel. Moderated by Chris Thompson this was a chance to look back at Titan’s previous output and get a sneak peek at the covers for the upcoming Thirteenth Doctor book.

As you can see from the panel photo, I was keeping hydrated. The bottles of water provided by the con were huge (and most welcome!)

Of course, there was another side to SDCC – the elusive parties. I have to thank Penguin Random House, LINE Webtoon, Legendary Television and the Writer’s Guild of America for their hospitality at their various events. I don’t have much in the way of photographic evidence, although did have a few pics snapped at Legendary’s Lost in Space party which saw this fellow spinning the wheels of steel…

… and me handing out with Don West himself, Ignacio Serricchio. 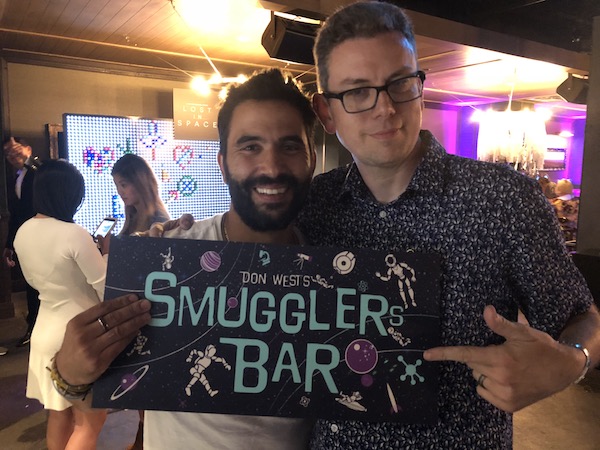 And that was about it. Of course, there were plenty other moments that I haven’t been able to get into here, including hanging out with chums Michael Moreci, Phil Levy, Jason Inman, Ashley Robinson, Jeremy Lambert, Adrian Wassel and more. Then, there were all the comics and souvenirs I picked up along the way (including an Ewoks animation cell, oh yes!)

SDCC is always a crazy time, and I love every mad minute of it. Roll on my return to San Diego in 2019!