The next two chapters of Pacific Rim: Amara are now up on LINE Webtoon. 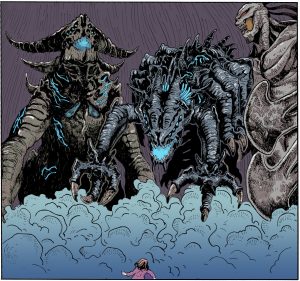 Time has moved on for Amara who, six years after her parents were killed, is still struggling to adapt to life with her reluctant guardian, Kai.

This week’s instalments bring us a glimpse of a previously unrecorded Kaiju attack in Seattle, and our first experience of Mech-Race through the slums of Santa Monica.

Oh, and the eagle-eyed fans among you may recognise that the image to the right shows the Kaiju known as Ragnarok, who is cropped from the panel in the finished Webtoon comic. That’s because BigN’s art for the comic was drawn at a larger scale so it could be used in other formats in the future.

Head over to LINE Webtoon to check out chapters 4 and 5.