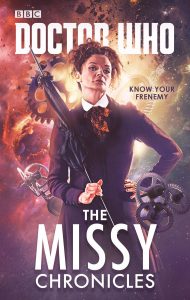 Unfortunately, the Beast from the East caused trouble for the most evil Time Lord in the Universe.

The snow storm that caused chaos across England last week also managed to scupper our planned Doctor Who The Missy Chronicles signing at Forbidden Planet in London.

Nothing can stop us this time.

You can check the full details here.

In the meantime, feast your eyes on this brand new trailer for both The Missy Chronicles and The Day She Saved The Doctor.