And I’m back in the UK after a week travelling Stateside for both the Gallifrey One Convention and a special visit to Lucasfilm in San Francisco.

I thought I’d jot down a few memories, but be warned… I am largely jet-lagged so ask your forgiveness for any spelling or grammatical mistakes! Have pity on my poor addled brain.

I arrived into Los Angeles on Wednesday last week, and met up with my buddy George Mann at the convention hotel, the Marriott LAX. Things began as they were to continue, with a great night in the lobby bar, catching up with old friends and meeting new ones too.

The next day, I headed into Burbank for meetings at DC Comics and Legendary Pictures. The later saw me geeking out over the many Pacific Rim props and models around the office, including this original maquette of Knifehead… 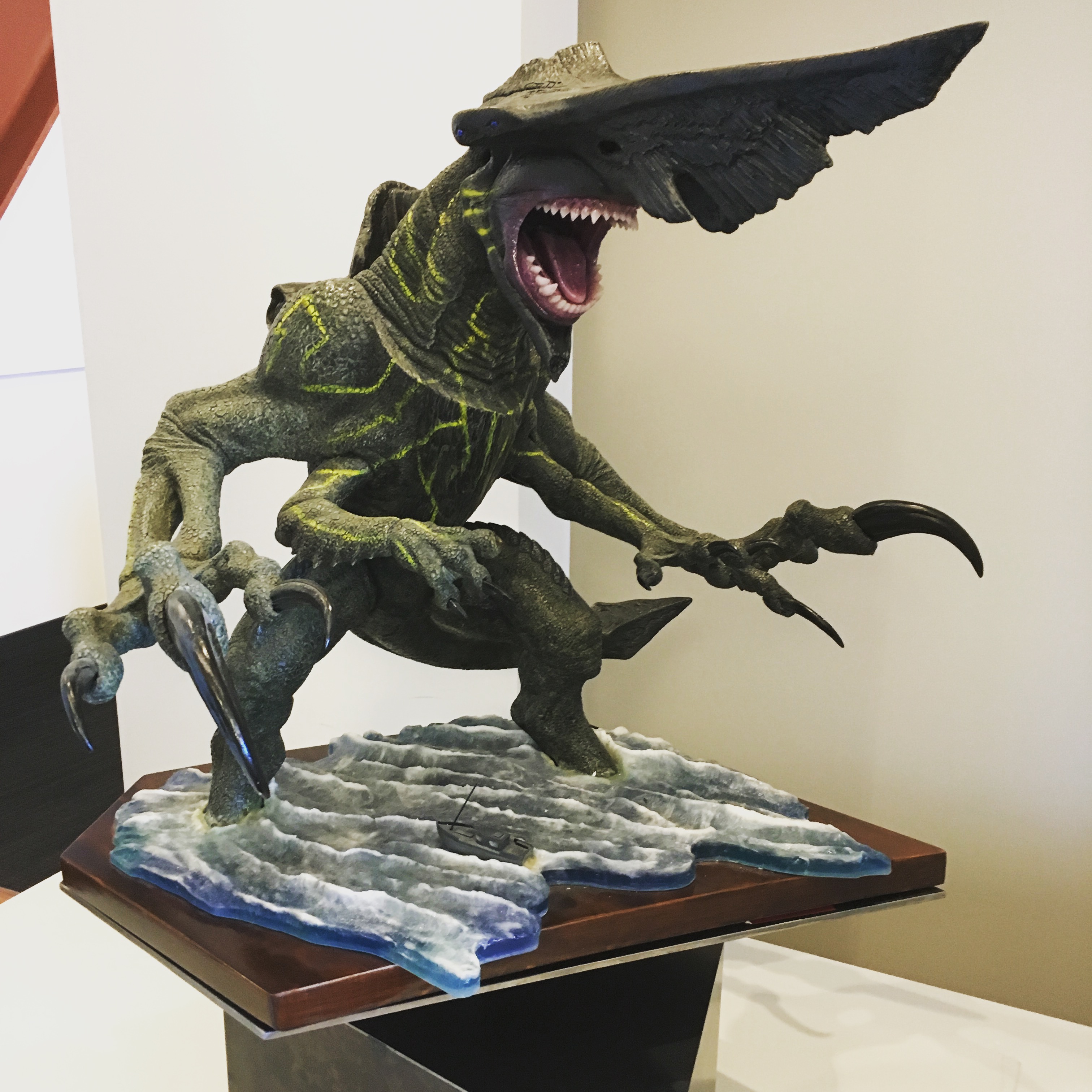 … and the gorgeous Crimson Typhoon armour… 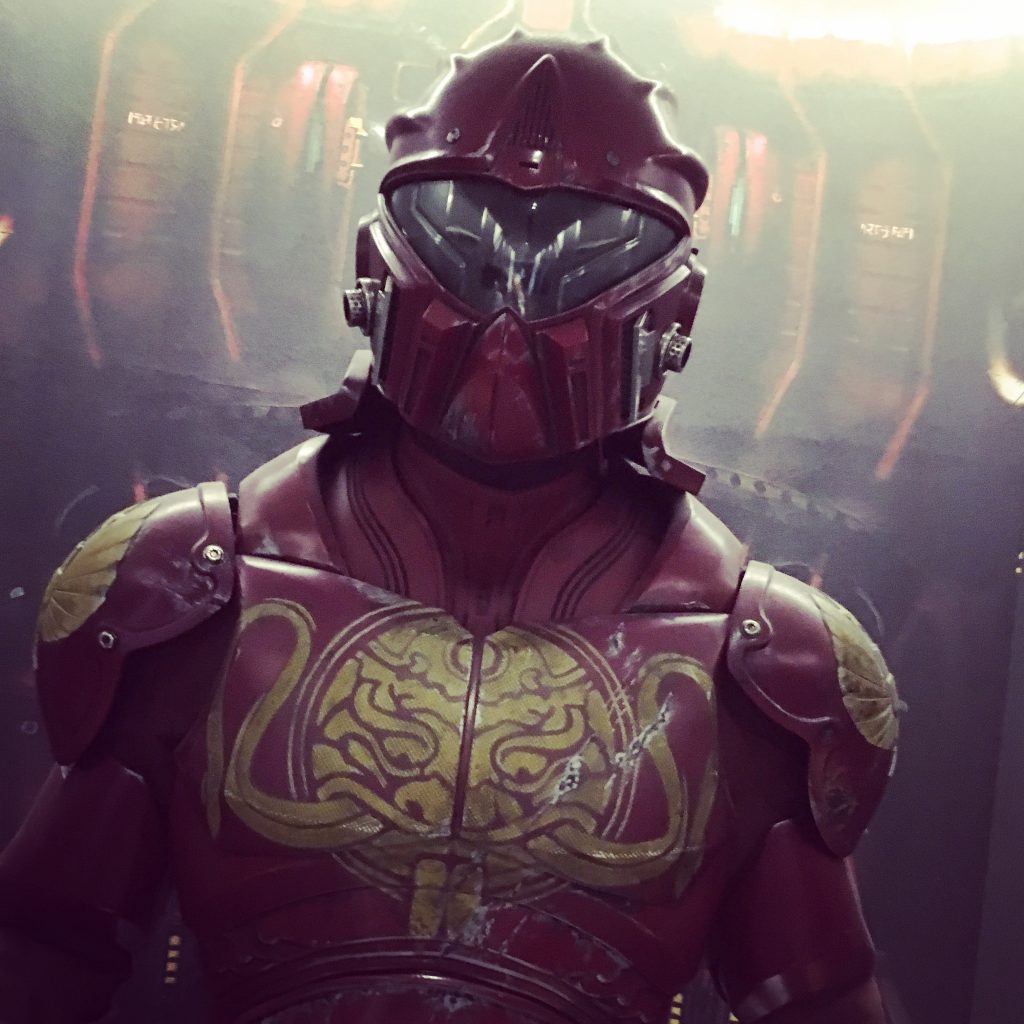 My tour of the Kaiju relics done, I met up with George and his brother Scott, and headed for Magnolia Blvd. It was almost as if this quirky street had been created especially for us. It was packed full of monster and horror-themed shops such as Dark Delicacies and Creature Features, plus a host of Halloween stores that we originally dismissed as costume shops until we ventured inside and discovered shelf upon shelf of Universal Horror merch and other devilish delights. I wish I’d made a note of the name of my favourite one. All I know is that it has a life-size model of one of the hitchhiking ghosts from my favourite Disney attraction, The Haunted Mansion.

Special mention must also be made of the Bearded Lady Oddity Shop which was a real-life cabinet of curiosities. I spent far too long mooching around in there, and came out with the most macabre paperweight I’ve ever bought. 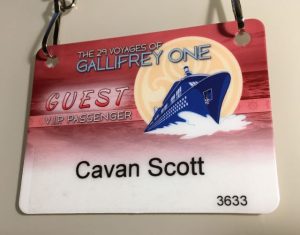 Then it was back to the hotel for the convention to begin properly. The next few days were a heady mix of fun and Doctor Who frolics, which kicked off on Friday with a talent-packed panel about the past, present and future of Doctor Who fiction, moderated by Tony Lee. Panelists included:  Peter Anghelides, Jenny Colgan, Richard Dinnick, John Dorney, Matt Fitton, George Mann, Rob Shearman and Mike Tucker.

Friday night saw me taking part on Paul Cornell’s special Would I Lie To You? game show panel, based on the popular BBC TV series. Paul was our very own Rob Brydon, and saw the ‘Proffessionals’ team – Jamie Mathieson, Jenny Colgan and yours truly – up against the ‘Podcasters’, namely Steven Schapansky, Riley Silverman and Liz Myles.

As Paul mentions on his blog, I spent most of the time completely befuddled, but it was a wonderful anarchic way to spend an evening, and I’m pleased to say that Jamie, Jenny and I proved ourselves to be masterful liars (which, as we’re storytellers, is no bad thing!)

Saturday brought three more panels. Moderated by Sage Young, The Peter Principle was a wonderful celebration of Peter Capaldi’s time as the Doctor, with memories from myself, former Doctor Who Brand Manager Edward Russell, comic artist Simon Fraser and fan Pam Buck. The amount of love in that room was heart-warming.

(I also managed to dodge the question from the floor about who was Capaldi’s best companion, Clara or Bill? I answered with one simple word: Nardole!)

Then it was over to comics. First up was a discussion about the future of comics and the silver screen, which I ended up moderating at the eleventh hour. The panel was made up of Richard Dinnick, Tony Lee, David and Scott Tipton and the comic legend that is Marv Wolfman! 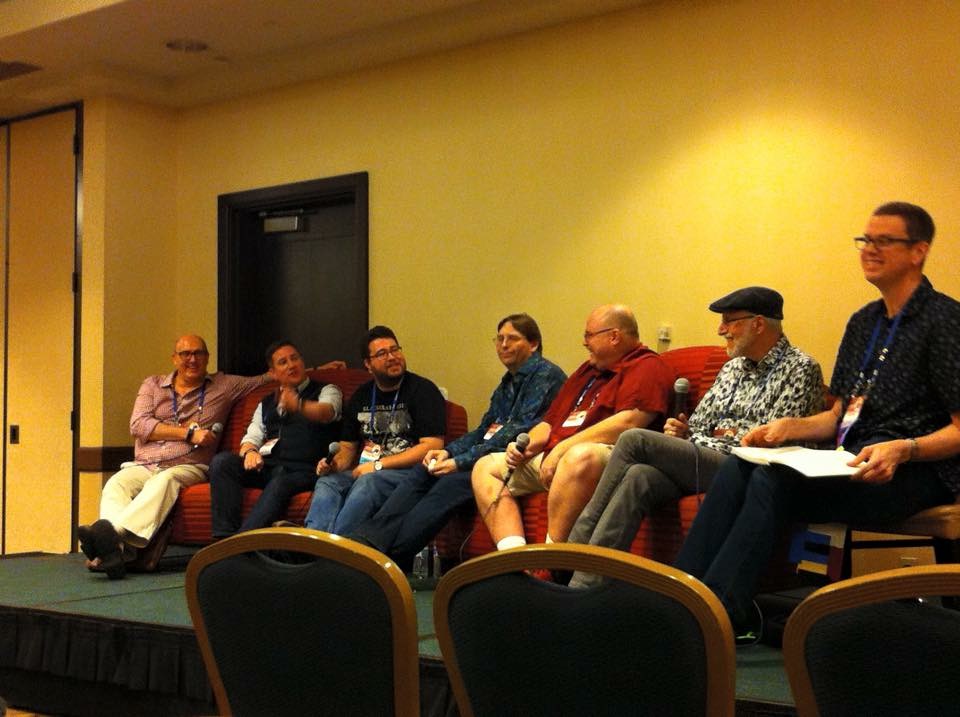 I was humbled and a little giddy to be sharing the stage with Marv, especially as my first ever DC comic I read was DC Comics Presents 26 which featured the first ever appearance of Marv’s Teen Titans.

Later that day, it was onto the main stage for the Titan Comics panel, ably hosted by Titan’s very own Chris Thompson. I was sharing the sofas with Simon Fraser, Paul Cornell, George Mann, Christopher Jones, Richard Dinnick and the latest additions to the Titan family, Jessica Martin, who is drawing a back-up strip for the new Seventh Doctor mini-series featuring Mags, the character she played in Greatest Show in the Galaxy) and the Uber-cool Jody Houser who is writing the brand new Thirteenth Doctor ongoing series.

After a very late night that ended with Chris, Jody and I singing Love Shack in the karaoke room, it was off to bed for a few short hours before taking to the stage again on Sunday to discuss the ongoing legacy of Sherlock Holmes with George Mann, Paul Cornell, Shannon Sudderth and moderator Robert Napton. It was another fascinating panel, delving into the reasons why Holmes continues to endure today.

As a side note, we were asked what modern TV show we would love to mash-up with Holmes. I said I-Zombie. Just imagine how cool it would be to see what happens to Liv if she ate Sherlock’s brain?

And that was that for my first Gally, except for a wonderful moment in the closing ceremony where Steven Moffat held 5,000 fans spell-bound with a story of Timothy Dalton in the TARDIS. Needless to say, Steven got a enthusiastic standing ovation, a tribute to the man who has been so instrumental in the last ten years of Doctor Who. 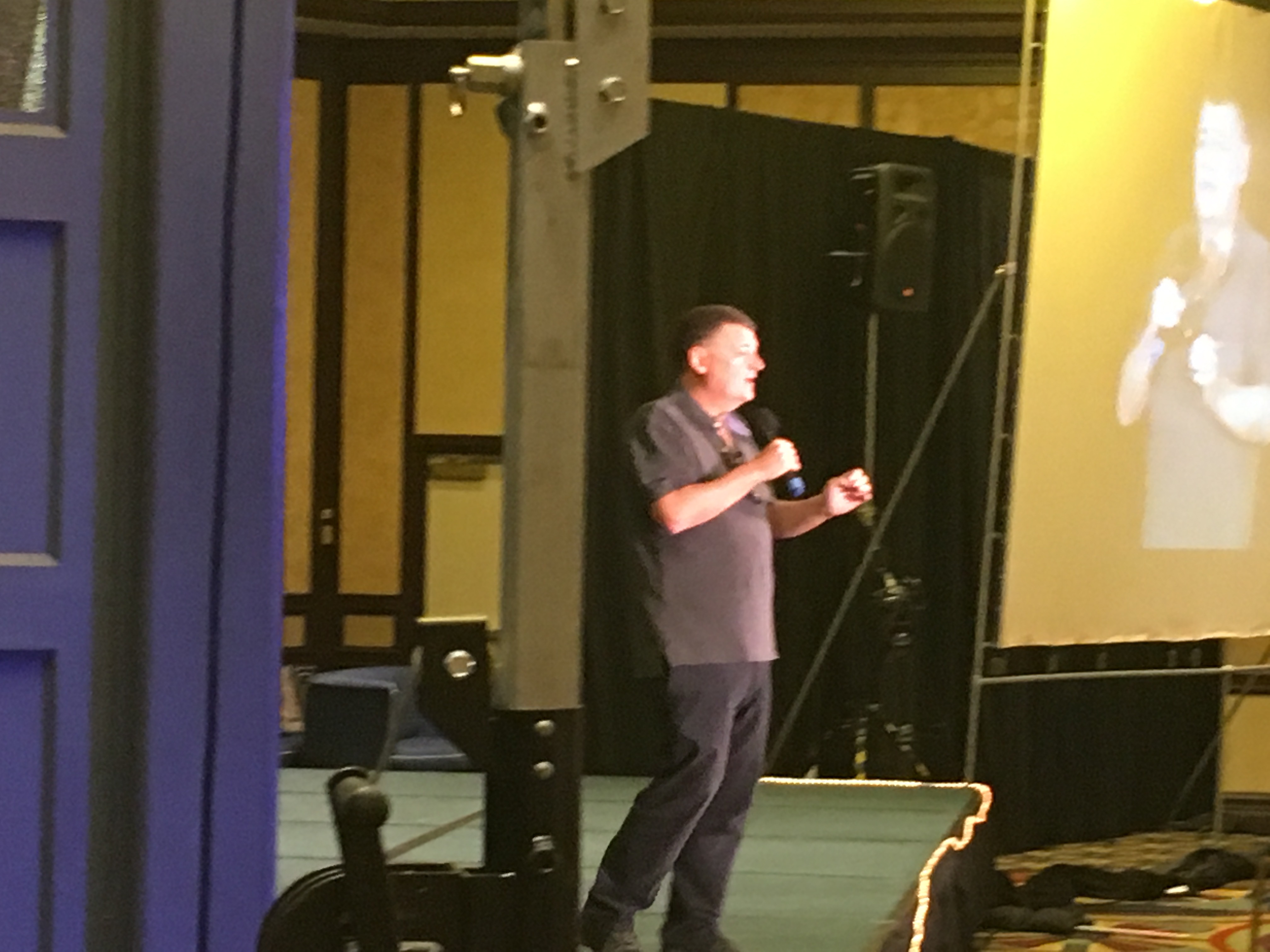 Thanks to Shaun and the Gallifrey One team for looking after us all so well, especially Heather who always made sure that we were where we were supposed to be. And also thank you to all the attendees who came along to my panels and signings. You’re ace, every last one of you.

A few final memories occur to me as I bring this post to an end.

The first was meeting Alisa Stern of Doctor Puppet fame who very kindly let me hold her amazing puppets. I wanted to sneak them into my suitcase. They are just adorable.

The second was meeting David Wise who has written for a host of glorious things such as Buck Rogers, the Animated Star Trek, Teenage Mutant Ninja Turtles (he added Cowabunga to the TMNT lexicon!) and much of the 1980s Transformers series. In fact, he wrote my favourite Transformers scene which is Megatron and the deceptions getting drunk on Energon! He also created Optimus Prime’s back-story.

I officially geeked out. 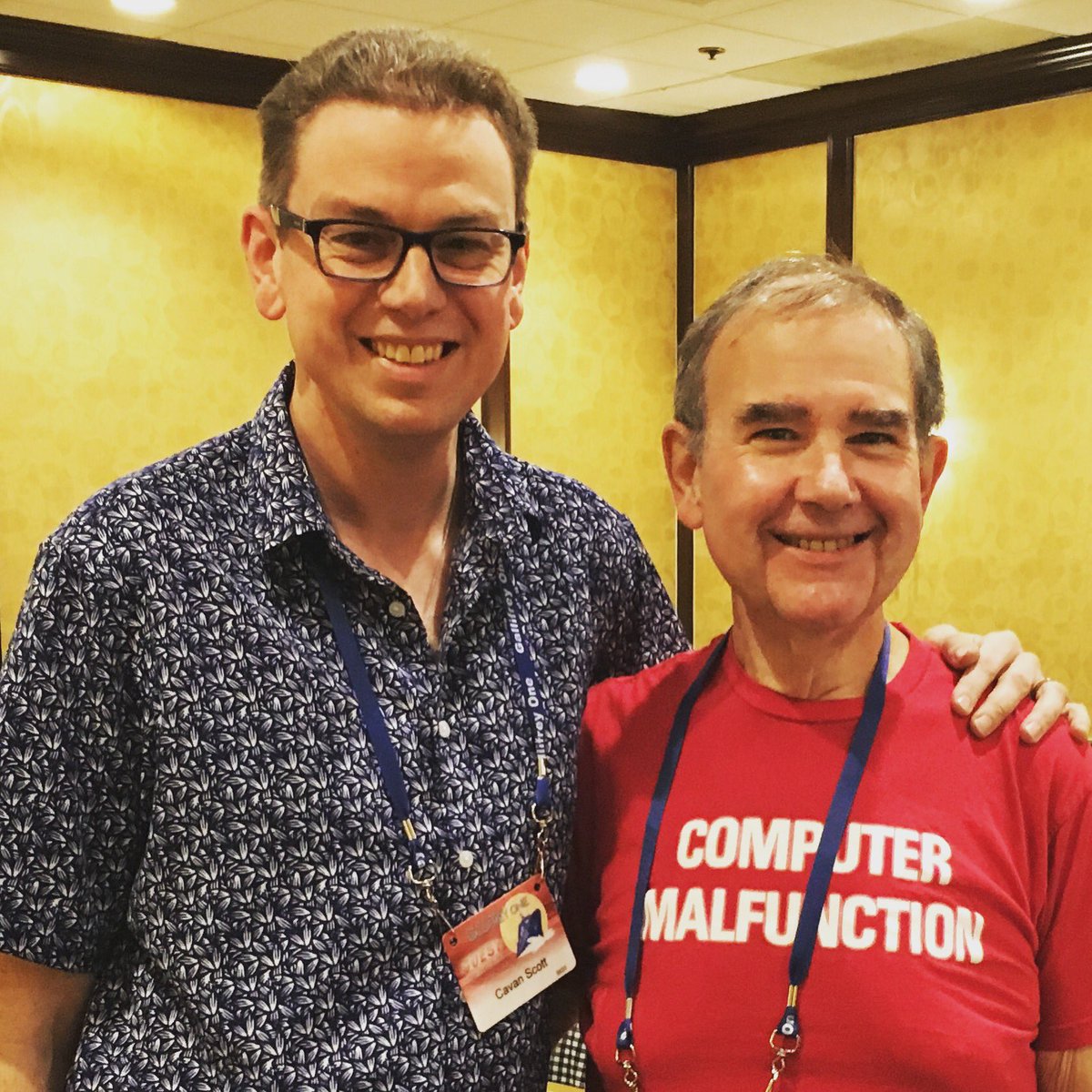 The third was the wonderful Laura Sirikul who cosplayed as the LEGO Thirteenth Doctor. Just look at her incredible costume… 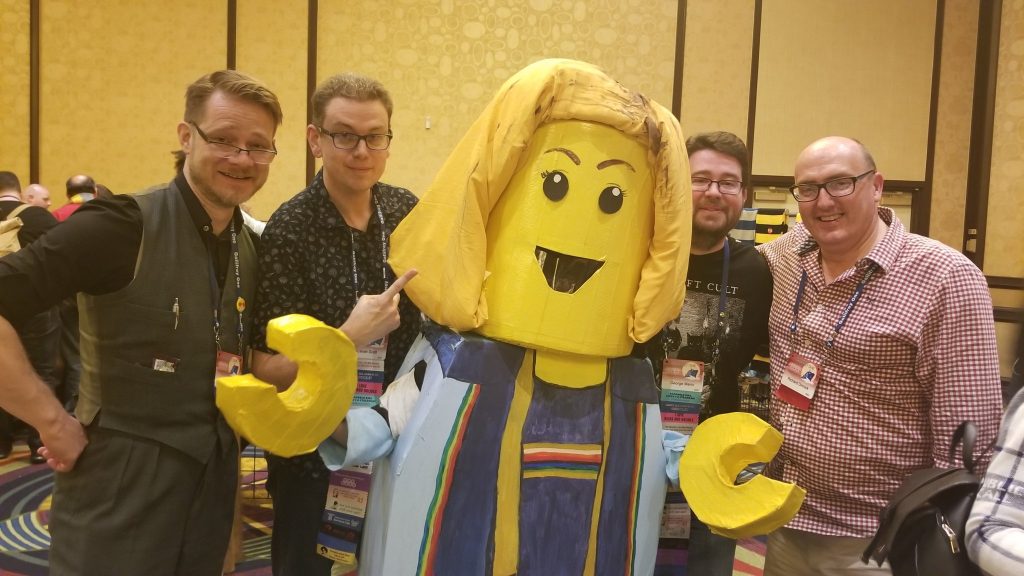 OK, this is turning into more than a few now, but I have to mention my buddy Shannon Eric Denton who popped along on Friday to hang out. It was so brilliant to see him.

The final memory came during lunch in the green room on Saturday. My daughters Skyped through to me and squealed with joy when they spotted Matt Lucas sitting on the table behind me. Terry Molloy then asked if he could have a word with them. He peered into the screen and, slipping into full Davros mode, told them that they would make exceptional Daleks.

Of course, as the sun set on Gallifrey, I was preparing to jet off to San Francisco, but that’s a story for a day when I’m not falling asleep…