With issue two of Pacific Rim Aftermath on the horizon, it’s time to share my writer’s commentary of the first issue.

Be warned… HERE BE SPOILERS!

Grab issue one, flick back to page one, and read along as I run through some of the background to the events and characters of the issue.

Page 1: And we’re right into a Kaiju attack. Even though Aftermath is set after humanity’s victory over the Kaiju in the first movie, we wanted to kick off with some good old fashion giant monster vs robot action. 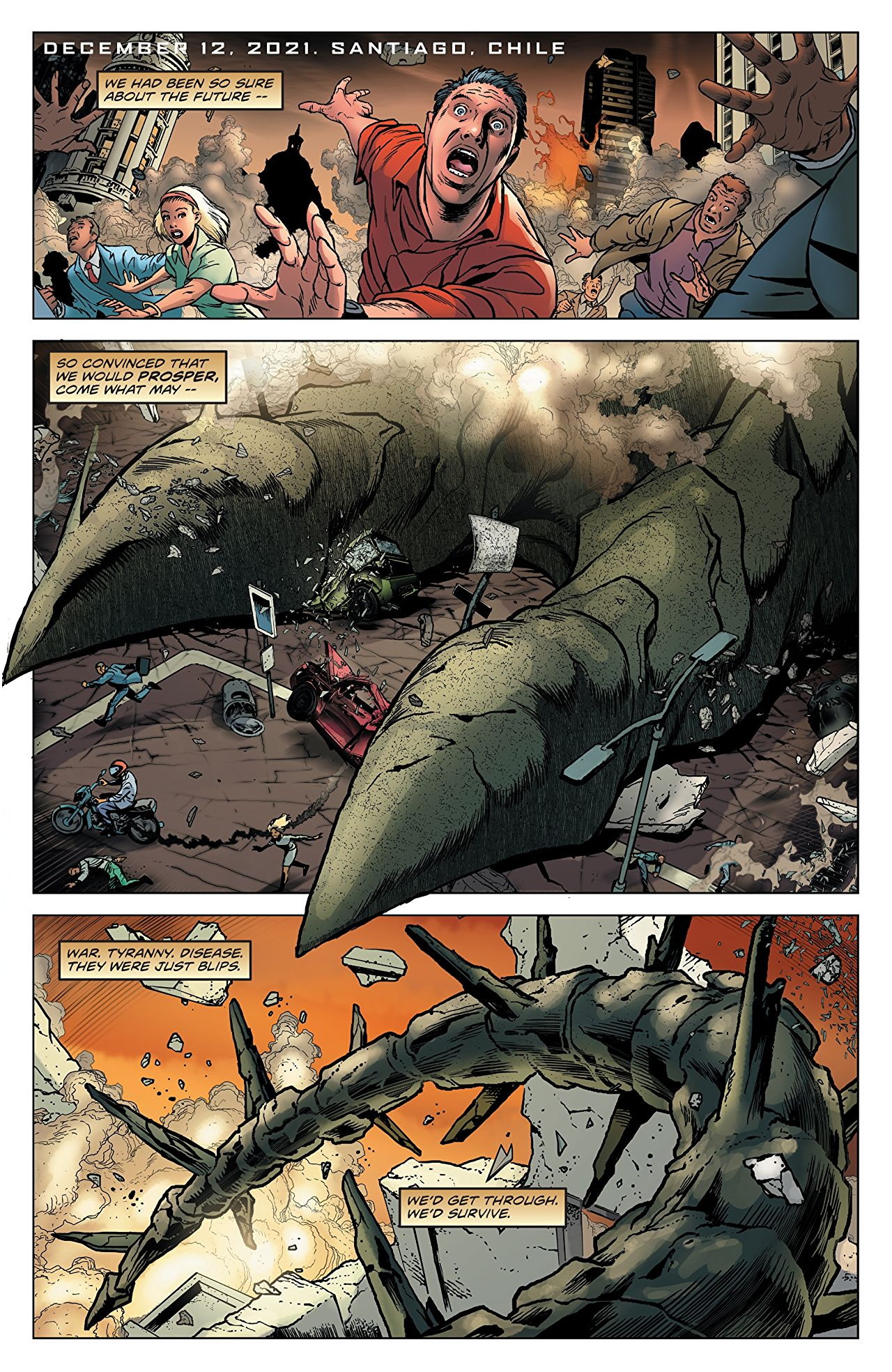 That’s the Santiago Stock Exchange building being demolished in the background. I gave Rich some Google Street View links for reference. Street View is such a great tool for writers. Instant research without the jet-lag.

Page 2 & 3: Say hello to Fauxface, our first Kaiju of the mini-series, and also to our brilliant artist Rich Elson. 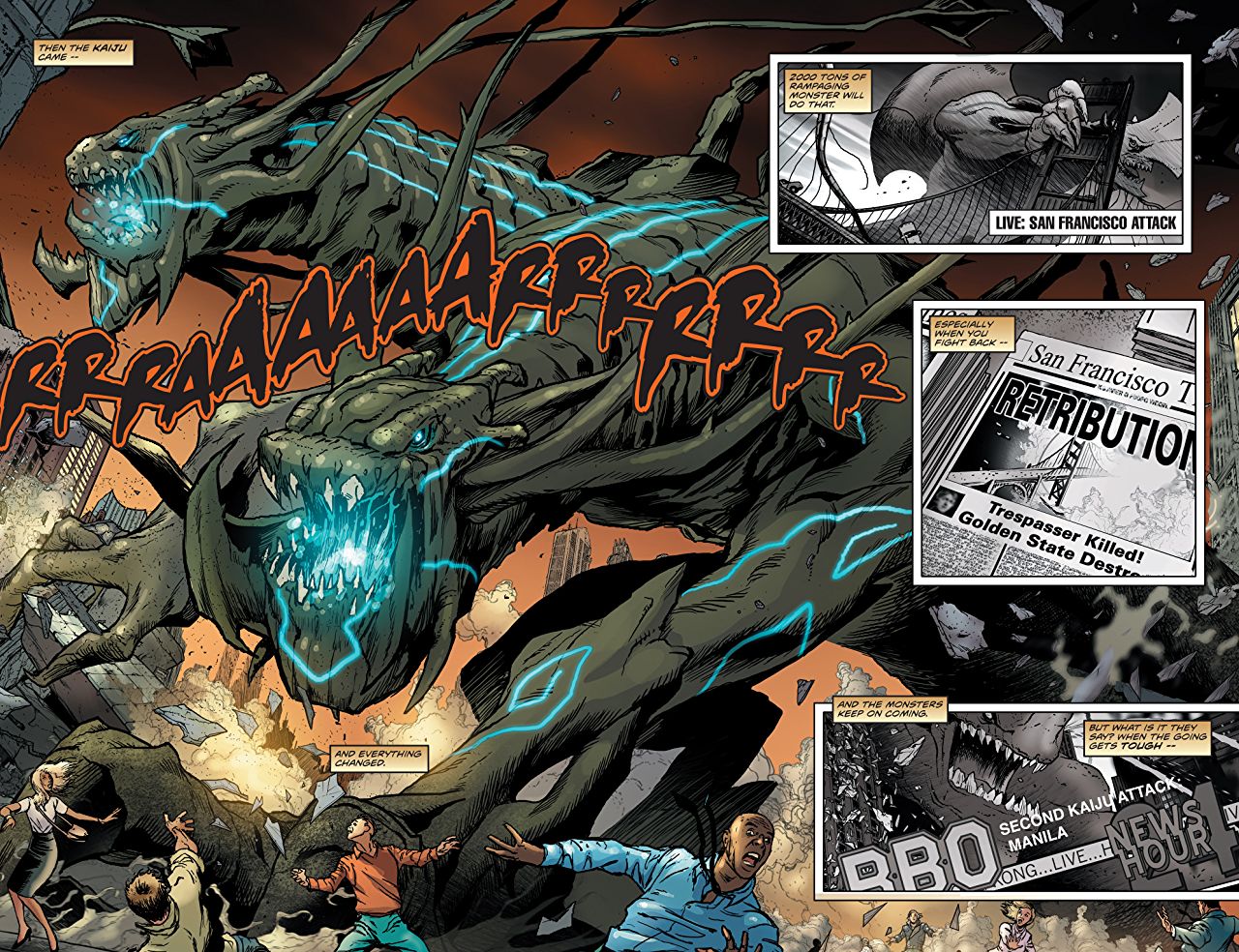 I’ve been a fan of Rich’s work in 2000AD for years and so suggested him for our story. I was over the moon when he said he was available.

Page 4: And talking about Vulcan Specter… here she is. 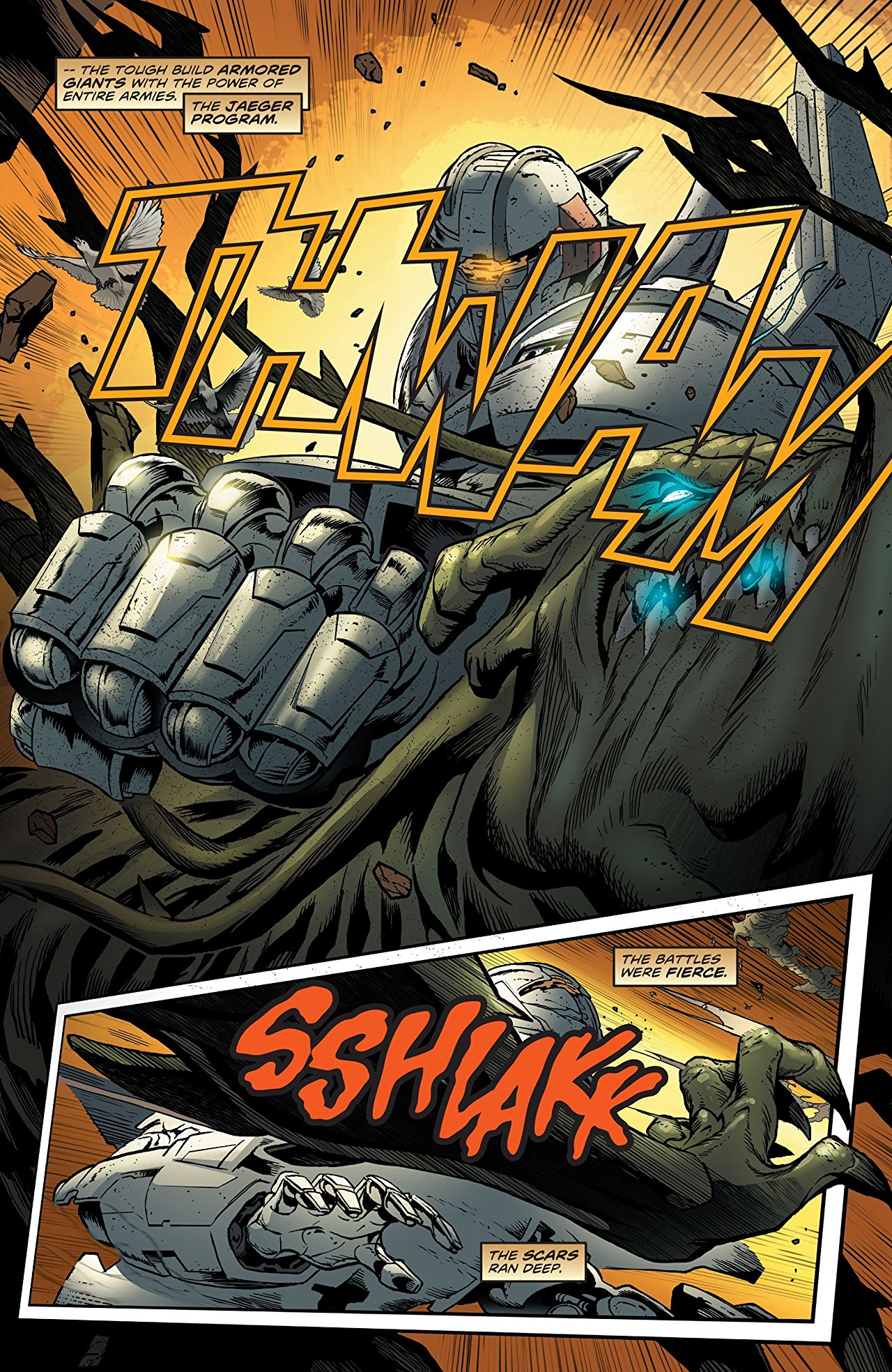 Vulcan Specter was an Australian Mark-3 Jaeger launched on December 27, 2017 and was in many ways a forerunner to Striker Eureka, so the design was based off her look from the first film.

Page 5: Meet Joshua Griffin and Tyler Zachery, Vulcan Specter’s pilots, linked forever thanks to the drift. But what happens when that partnership is broken?

Page 6: I love Guy Major’s colours in this battle. Those energy bursts from Vulcan Specter’s cannon look like they hurt!

Page 7: The idea of a Vulcan Specter balloon on a ticker-tape parade still makes me smile. Love that propaganda poster of Griffin and Zachery too. Would love one of those for my study wall.

Page 8: And now we move to the ‘present day’ of our story – 2034, nearly a decade after the events of Pacific Rim. Right from the off, we kept a central phrase at the core of our story, as seen on the front cover – ‘The Mighty Have Fallen’. I was really interested in how these superstars of the Jaeger Age cope with a world with no monsters to fight. Griffin, for one, has not coped at all well…

Page 9: Rich draws a good fight. He knows his martial arts, so tries his hardest to make every punch land.

Page 12: We cut to the Jaeger scrap yards near Santa Monica. Editor Robert Napton suggested we add the now derelict fun-fair in the background to give a sense of place. It was a really good call. I love all the visual cues that the Kaiju war has left scars on the world.

Pena is going to be another of our other major players. Here’s how the script originally described him:

PENA (32) is a weasel-faced Hispanic man. Tall and scrawny, he thinks he’s a player. He has a gaunt, pockmarked face, multiple piercings, and is wearing a vest beneath a sleeveless denim jacket.

Page 13: Originally Dwayne was using a blow-torch to cut through the fence, but it felt a little too old-fashioned, and so was swapped with an energy weapon that can cut perfect squares: the door-gun.

Page 14-15: Some days you get pages pop into your in-box that you can’t stop looking at. This was one of them. Rich put so much detail into the Pan Pacific Defense Corps’ Scrapyard, full of old rusting jaegers. Combined with Guy’s colours, it certainly looks like a graveyard, and you can just imagine the radiation leaking from every wreck. Right from the beginning, I knew that Joshua would say no to a haz-suit. He already feels like he’s on borrowed time – why would he care about a few thousand rads?

Oh, and there’s the first reference to the Mech Czar… who’s that?

Page 16-17: The Capello gang are wielding guns fashioned from stolen Jaeger tech, most notably Coyote Tango’s V-P1 EnergyCaster. The idea of gangs using Jaeger weaponry was a big part of the original brief for the mini-series, which was codenamed: ‘Underworld’.

Page 18: In early drafts Joshua was originally called Jacob, but underwent a name change when we realised how near Jacob was to John Boyega’s character in Pacific Rim Uprising, Jake.

Page 19: The Kaiju in the flashback is Mutavore who breached the coastal wall to attack Sydney. It was eventually brought down by Striker Eureka…

Page 20: … but not before ripping off Vulcan Specter’s head. According to Pacific Rim lore, Mutavore proceeded to fling the head over the Sydney Opera House. Griffin and Zachery were still inside.

Page 21: When I originally blocked out the issue, Griffin’s fight with Capello’s knuckle-duster-wearing goon was to conclude the issue, but in discussions with Legendary we decided to end on a fan-favourite character from the first film…

Page 22: And there he is… but as you can see, he’s not exactly the man he was when we last saw him.

So, that’s issue one. Of course, the issue also includes a special back-up strip, I Am Pentecost, but more on that soon…

Issue two of Pacific Rim Aftermath hits on February 21st and is available from all good comic stores and Comixology US and UK. 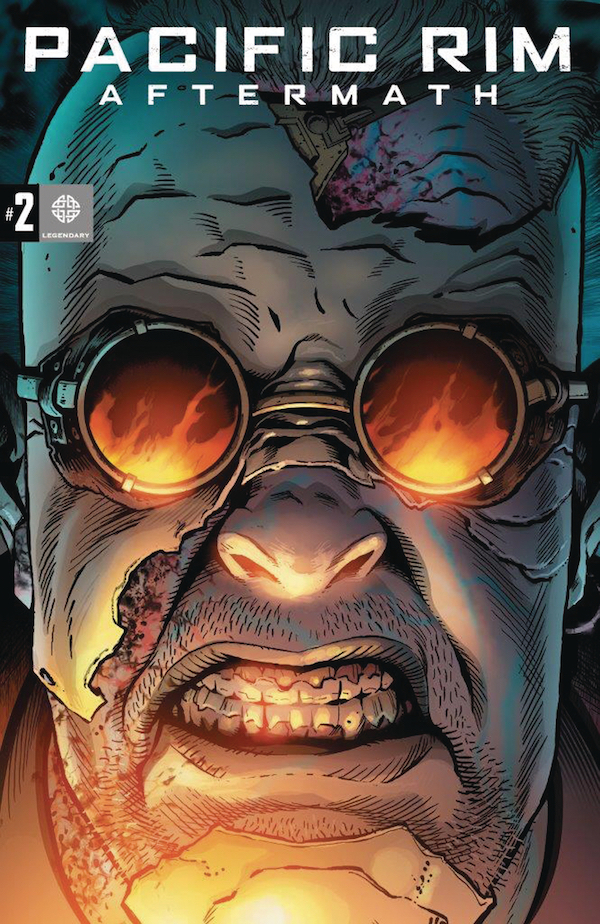