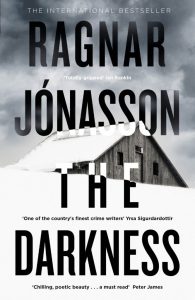 Hulda Hermannsdóttir is operating on borrowed time. A police detective nearing the end of her career, Hulda is forced into early retirement, but is given the chance to solve one last mystery. Opening a cold case, the jaded detective proceeds to step on the toes of her colleagues and invoke the wrath of her superior.

After reading White Out at Christmas, I was keen to dip into another Ragnar Jónasson. The first in a new series, The Darkness is a deceptively simple whodunit that proves exactly why Jónasson is a master of misdirection. Slipping between Hulda’s investigation and the atmospheric last day of the victim’s life, the story unfolds through a series of short, sharp chapters.

Bitter and haunted by her past, it’s fair to say that Hulda isn’t the most sympathetic of characters. Even though we are told that she is a competent officer, she rushes headlong into her last case, making rash decisions that are questionable at best. The investigation is Hulda’s last chance to prove herself. Life has been hard, and in many ways Hulda is as much a victim as the women she investigates.

Published on 15th March by Penguin, The Darkness is a curious blend of nordic noir and golden age detective fiction, although the startling conclusion is anything but cosy.

I’m intrigued to see what happens next…