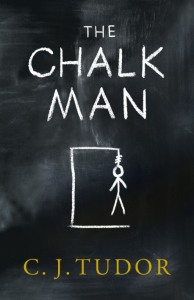 The Chalk Man is a book that kept me guessing right to the end. It tells the story of a group of friends who find a mutilated body in the woods, the action flitting back and forth between the events leading up to their grisly discovery in 1986, and the consequences thirty years later. Back in the 80s, a trail of chalk men led the kids to the corpse, and now, all these years later, the creepy chalk drawing have returned. But who is the ghoulish artist?

As a debut novel, The Chalk Man is incredibly impressive. CJ Tudor really gets into the head of Ed, her narrator, both as a boy and an adult. He is real and engaging, his descriptions visceral and evocative. As in all good mysteries, the clues are all there, waiting to be knitted together, and yet Tudor really surprises you, right to the gut-punching conclusion.

Like Stranger Things and Martin Stewart’s recent The Sacrifice Box (which I talked about on Twitter, back in December), The Chalk Man plays with 80s nostalgia. It is a novel about lost innocent and lingering regrets, of not being able to leave the baggage of the past behind you, and yet being forced to move on by events beyond your control. Gory and gripping, The Chalk Man also plays with horror tropes, although this is no supernatural thriller. The horror found within its pages is that of tainted human souls and fragile minds, and the reveals are delightfully unsettling.

The Chalk Man is available from Amazon and all good bookshops, and you can read a fascinating interview with CJ Tudor here .