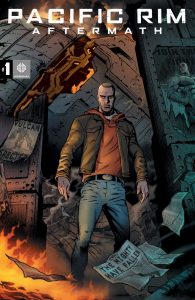 Aftermath introduces former Jaeger pilot Joshua Griffin, struggling to make a life for himself in a world without monsters to fight. The incredible art is by Richard Elson, best known for his stellar work in 2000AD, with colours by Guy Major.

Meanwhile, I Am Pentecost focuses on John Boyega’s character from Pacific Rim Uprising. Art is by Beni Lobel, with colours by Christopher Sotomayor.

Letters on both come courtesy of John Roshell of Comicraft.

I’ve had a blast working on this series, working with editor Robert Napton and Legendary’s master of Kaiju mythology, Barnaby Legg. And issue one already seems to be going down well.

Over on Twitter, Erik Burnham (Ghostbusters, TMNT) says: “a fun comic that fans of the film should dig — especially when they get to that last page“, Paul Cornell (Saucer County, Vampirella) says: “great stuff, good art, redolent of the movies.” Meanwhile, Rob Williams, (Suicide Squad, Judge Dredd) calls it: “a really fun Jaeger-bomb (someone else must have used that, right?) primer for the upcoming movie,” while Jason Inman (DC All Access, Jupiter Jet) says Aftermath: “has Kaiju’s a plenty and is a nice buildup to the new movie.”

You can read an excerpt over on Legendary’s Facebook page, and win a signed copy on twitter.

And there are more goodies coming soon. In the meantime, Pacific Rim Aftermath #1 is available from all good comic shops and digitally from Comixology US and UK.