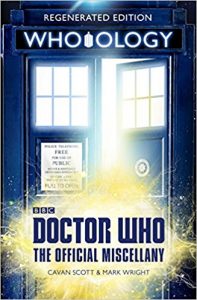 Well, the old edition was wearing a bit thin…

Who-ology: Regenerated Edition hits the shelves today, updated to incorporate events leading up to and including Twice Upon A Time. So that’s all of the Eleventh and Twelve Doctors runs, not to mention the appearance of the War Doctor in the 50th Anniversary story.

Mark and I got the band back together to update the text, and Ben Morris returned with some awesome new illustrations. I’m so happy that there’s a new edition. The original means a lot to me. It was the first Doctor Who book to ever become a Sunday Times Bestseller, and also helped me secure writing the Ninth Doctor comics for Titan. When I first approached editor Andrew James, he already knew my name as he was using a well-thumbed copy of the book as a bible for the new comics!

People have already been chatting about it on twitter and wondering how we included details about Twice Upon A Time. The answer is we were given an early script to work from. This is the norm for tie-in books, from reference work to novelisations. It usually means that there are slight differences between what we read in the script and what’s actually shown on screen. Who-ology was no different. We didn’t know the Thirteenth Doctor’s first words, for example, and only found out with everyone else on Christmas day, hence them not appearing in the book. Eagle-eyed readers may be able to spot a couple of other differences too. Think of it as a timey-wimey treasure hunt!

You can pick up your own copy in all good bookshops! And don’t forget to let us know what you think!