My first read of 2018 was My Mother’s Secret, Sanjida Kay’s new psychological thriller, due to be published by Corvus in May. I first heard Sanjida’s work when she read excerpts from her first two novels at the Crimes in the Caves event we both took part in last October, so I was keen to dive into the ARC when it arrived before Christmas. 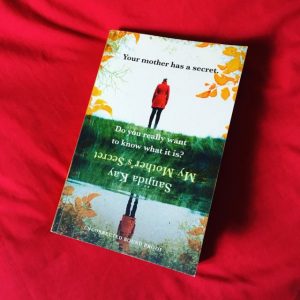 It’s hard to discuss the book without revealing the first of its many twists. The story is told through three distinct points-of-view; Bristol-based Emma and her teenage daughter Stella, and Lizzie, a woman who witnessed a terrible crime years before. At first, Lizzie’s life in the north of England couldn’t seem further removed from Emma and Stella’s sheltered suburban existence, but it soon becomes apparent that all three are intrinsically linked. Prone to panic attacks, Emma is leading a double life, but is found out by Stella, who sets out to uncover her deceit.

Sanjida weaves all three threads together with aplomb, knowing exactly when to drop hints that not all is as it seems, the reader usually realising the truth before the characters find out for themselves. The constant stream of revelations, divulged through short, elegantly precise chapters, propel you on, knowing that it’s only a matter of time before Emma and Stella’s world is torn apart. It’s the very definition of a page-turner.

This isn’t to say My Mother’s Secret is predictable. Far from it. Just when you think you’ve figured everything out, the rug gets pulled from beneath you. About three-quarters of the way through, I thought I had an inkling of where the story was heading, but thanks to Sanjida’s clever plotting convinced myself that ‘nah, that’s just not possible.’ Sanjida then gleefully proceeded to not only prove me wrong, but do it with such conviction, that I was kicking myself for not seeing it coming. All the clues are there in plain sight, and yet the devastating denouement still comes as a surprise, surely the mark of someone at the top of their game.

The icing on the cake was that much of the action is set in and around my native Bristol, from the Thekla, a floating music venue where I spent many a night in my youth, to my favourite National Trust property, the beautifully gothic Tyntesfield. There’s a real sense of place here, which you come to realise is an essential part of Emma’s character.

My Mother’s Secret is chilling and compelling, filled with exquisitely drawn characters and gut-wrenching twists that force you to ask the most terrifying of question of all: how would I cope if this happened to me?