I just called into Radio Bristol because I couldn’t take it any more. There was a phone in about the non-story that Dennis the Menace is (shock, horror) losing the Menace part of his name.

I’d just listened to a chap admitting that he’s never, ever read the Beano, but thought the changes were disgusting anyway and just HAD to pick up the phone.

The reason it’s a non-story is that Dennis regularly loses the Menace part of his name in the Beano, to become just Dennis and Gnasher. In fact, I think I’m right in saying that this current change happened a while ago anyway.

As for the changes to the character, well, they happened YEARS ago, and, as far as I know, no childhoods have been ruined.

Dennis is still the world’s wildest boy. He still causes mayhem. He still drives his parents mad. He still doesn’t like doing homework, and still has a wilful disregard to rules and regulations. He still has an Abyssinian wire-haired tripe hound who can bite through concrete, and still tears up Beanotown on his skateboard.

But, the main change is that he’s not a bully for bullying sake. He doesn’t beat people up because he thinks it’s fun. And, let’s face it, that’s not a bad thing, is it?

Why is it so upsetting that a comic character doesn’t celebrate bullying? Who thinks bullying is good?

I’m always amazed with the consistency of the characters in the Beano. The majority of the classic roster – Dennis, Minnie, Roger, and the Bash Street Kids – originated in the 1950s, and yet are completely recognisable all these years later. Certain aspects have changed, yes, but the changes are minimal, and necessary for the comic to remain relevant for children today. Their central core has remained remarkably true. Read a Dennis strip from the late 50s, and then one from today. He’s the same, recognisable rebel. Always has been, always will be.

But he, and the Beano, will keep changing. They have to if they want to keep attracting kids and, in many cases, introducing them to a lifetime of reading. This is no bad thing.

As Nigel Auchterlounie, who currently writes Dennis, just posted onto the Independent report on the ‘controversy’: 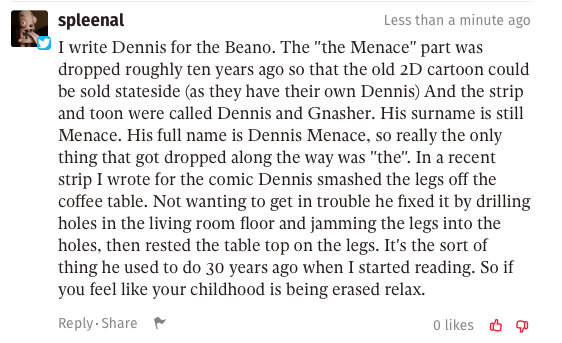 I’m very proud of my own contribution to the ongoing stories of Dennis, Gnasher, Minnie, Roger, Bananaman, Danny, Plug, Smiffy and the rest. I loved them as a kid, and my own kids have loved them in recent years. Long may the Beano continue, and long may it adapt and evolve.