Some exciting news was revealed over at the Big Finish website last week, as we announced the return of Chase Masterson as assassin-turned-detective, Vienna Salvatori, in a new three-CD audio drama written by Guy Adams, directed by Scott Handcock and produced by me!

Here’s the news story direct from the Big Finish site:

Chase Masterson is reprising her role as Vienna Salvatori, the universe’s most glamorous, and most dangerous woman, for Vienna!

Starring Chase Masterson as Vienna Salvatori and Samantha Béart as Jexie Reagan, Vienna is returning to Big Finish in Retribution! 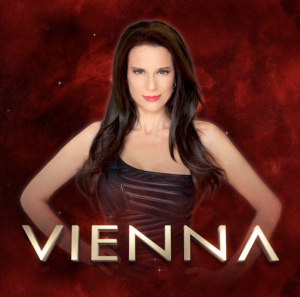 “Does the prisoner have any last words?”

Vienna Salvatori used to be a dangerous woman.

Vienna Salvatori used to be an assassin.

Vienna Salvatori has changed her ways.

After setting up a detective agency with her partner Jexie Reagan, Vienna has left her dark past behind her. Together, they bring villains to justice and right wrongs. Together, they are a team. But all that changes when a woman is killed in cold blood and Vienna is charged with the murder.

Vienna is sent to a hellhole of a prison with no hope of parole or release. But not all is what it seems on board the Splinter. With no means to escape, and no idea who she can trust, can Vienna survive life on the inside?

We talked to producer Cavan Scott about the return of Vienna, “We are incredibly excited to announce the return of our impossibly glamorous assassin. Or should that be former assassin, as Vienna has turned her back on her past to forge a new life for herself. Unfortunately, her past doesn’t quite want to let go.

“Guy Adams has written a tense, inventive script for our special three-part event, and director Scott Handcock has assembled an appropriately stellar cast. Vienna: Retribution sees Chase Masterson at her best, and Vienna at her worst. Our assassin-turned-detective has never fallen so far…”

Vienna: Retribution is available to pre-order at £20 on CD or £15 on download. All CD purchases will unlock a Download copy of the release, which works with the Big Finish app.