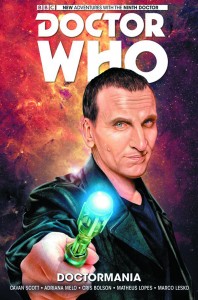 Previews has solicited Doctor Who: The Ninth Doctor Volume 2 – Doctormania, the collected edition of the Ninth Doctor issues 1-5, with words by me and art by Adriana Melo, Cris Bolson, Mat Lopes and Marco Lesko.

When the Ninth Doctor lands on Gharusa in search of a secret from Captain Jack’s missing past, the last thing he, Jack, and Rose expect to find is the Doctor’s face plastered all over the planet’s television screens – and a crowd of screaming fans! When Doctormania strikes, is anyone safe?! Plus – some shocking friends from the Doctor’s past – or is that his future? – pull the TARDIS team into high-stakes alien adventure in San Francisco!

Available in hardcover in the States on 30 November, the collection includes the stories Doctormania and The Transformed, plus Hacked, the story I worked on with artists Mariano Laclaustra and Carlos Cabrera for the 2016 Doctor Who Free Comic Book Day edition.

I’m glad Hacked is in there, as, first and foremost, the art is spectacular, but also that the story will have a bearing on the Ninth Doctor’s continuing comic adventures.

Doctor Who: The Ninth Doctor Volume 2 – Doctormania can be ordered by using code SEP161958.