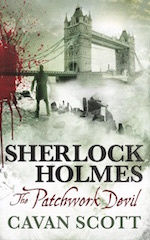 Sherlock Holmes: The Patchwork Devil is out in just a few week’s time, and I’m pleased to announce that I will be doing a signing at the Forbidden Planet Bristol Megastore on Saturday 30th April, between 1-2pm.

London, 1919. While the world celebrates the signing of the Treaty of Versailles, Holmes and Watson are called to a singular mystery. A severed hand has been found on the banks of the Thames, a hand belonging to a soldier who supposedly died in the trenches. But the hand is fresh, and show signs that it was recently amputated. So how has it ended up back in London two years after its owner was killed?

Come along and pick up a signed copy on Saturday 30th April! For more details, see the Forbidden Planet website.

You can find the Bristol Megastore at Units 4&5 Clifton Heights, Bristol, BS8 1EJ.