Friday was very exciting. I was in Chipping Norton, in the glorious Cotswolds, taking part in the World Book Day Biggest Book Show on Earth. This mammoth tour has been travelling the country with different authors each day, and Chipping Norton was the last venue.

It all took place in St. Mary’s church, which was lovely, if ever-so-slightly freezing!

Here’s a blatantly self-indulgent picture of my name on the screen in the church: 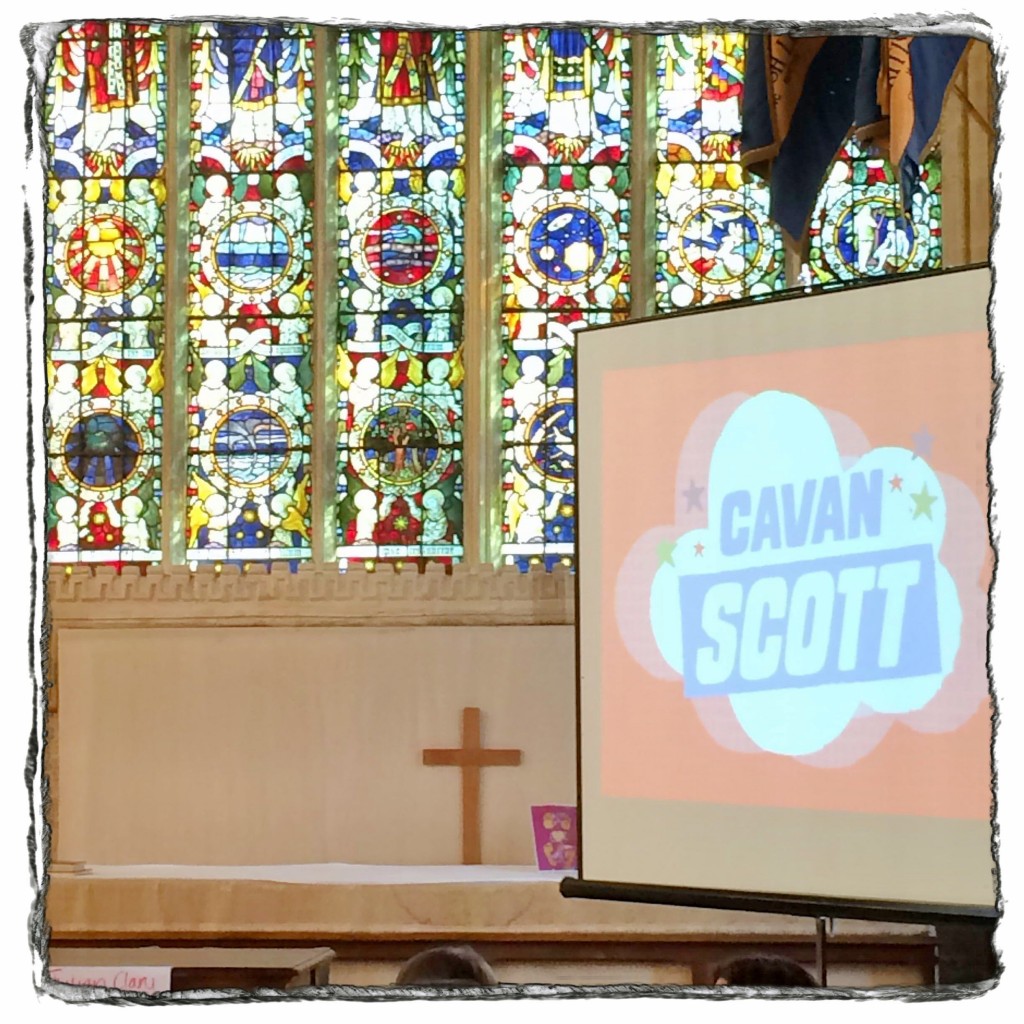 So, the idea about the event was that five or six children’s book creators would talk to a group of around 300 school kids from the local area, and afterwards there would be a mass signing, with books available from the wonderful Jaffé & Neale bookshop!

Hosting the event was Steven Butler, best known as the author of the Wrong Pongs and Diary of Dennis the Menace, plus owner of the sparkliest jacket in the world… 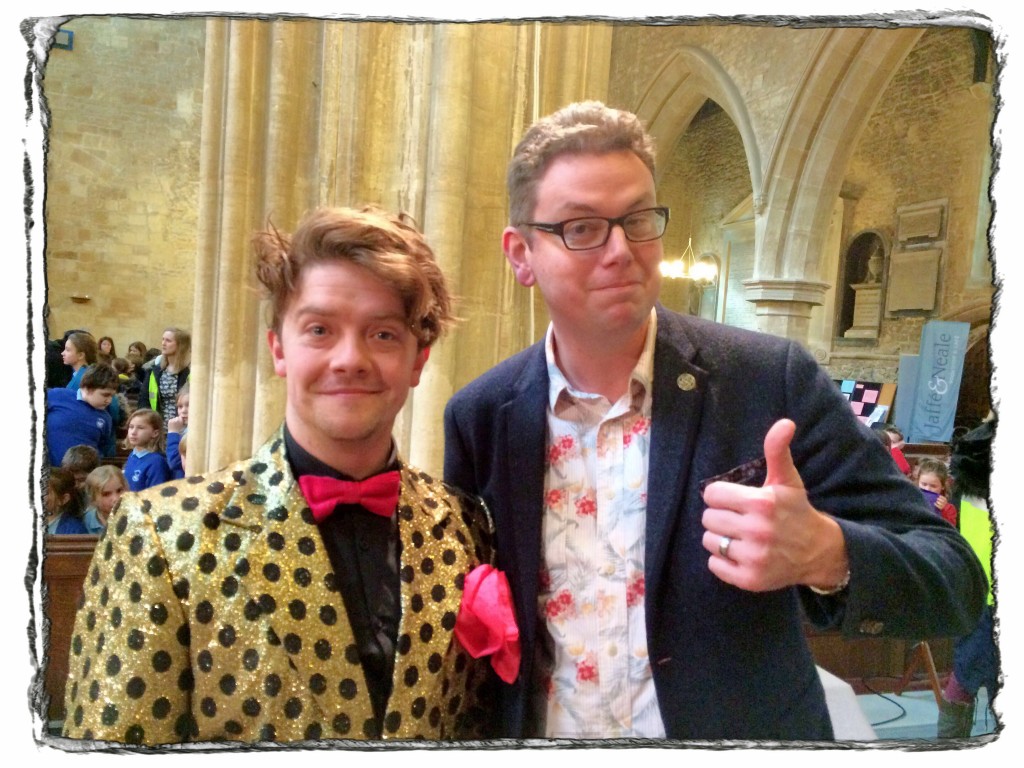 Opening the show was, er, me! I was slightly nervous to be shouting ‘BUMS’ in a church (there was a good reason, I promise). Luckily, fellow author M.G. Leonard was there to capture the word forming on my lips… 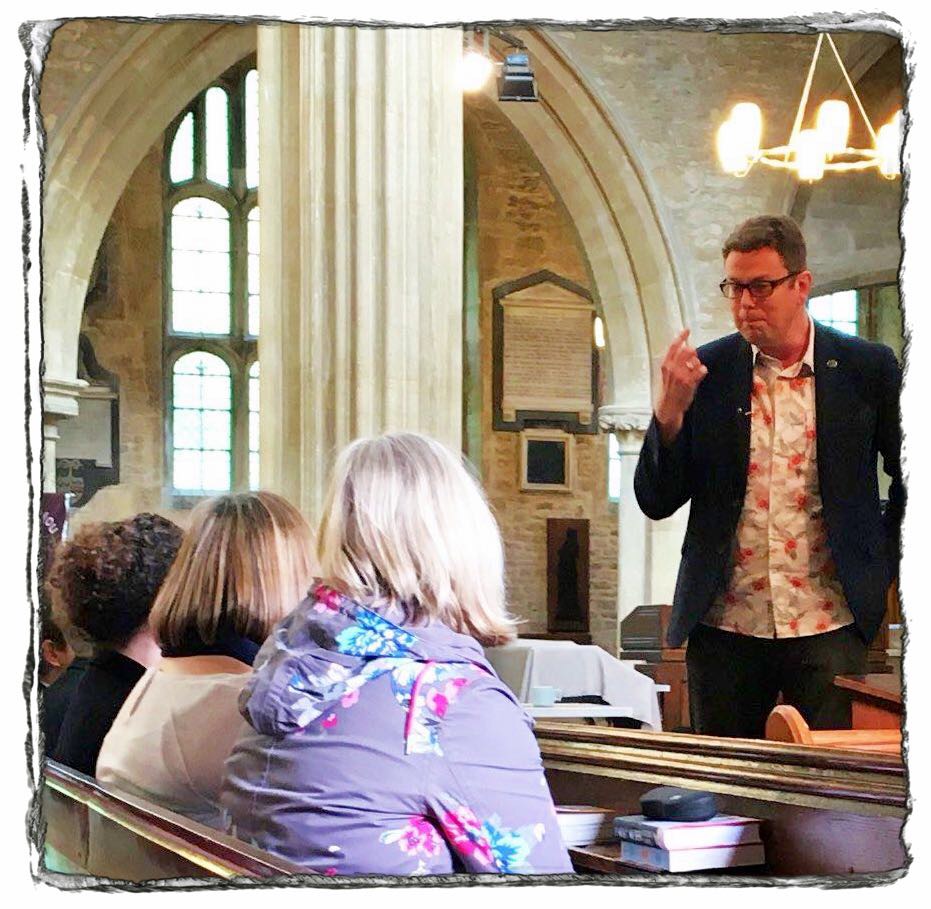 Actually, it looks like I’m getting really angry with those poor teachers in the front pew. I promise I wasn’t!

M.G. herself was up next, talking about her novel, Beetle Boy and its six-legged stars, from the Incredible Hulk-like Rhino Beetle to the spraying-acid-from-its-butt Bombardier Beetle. 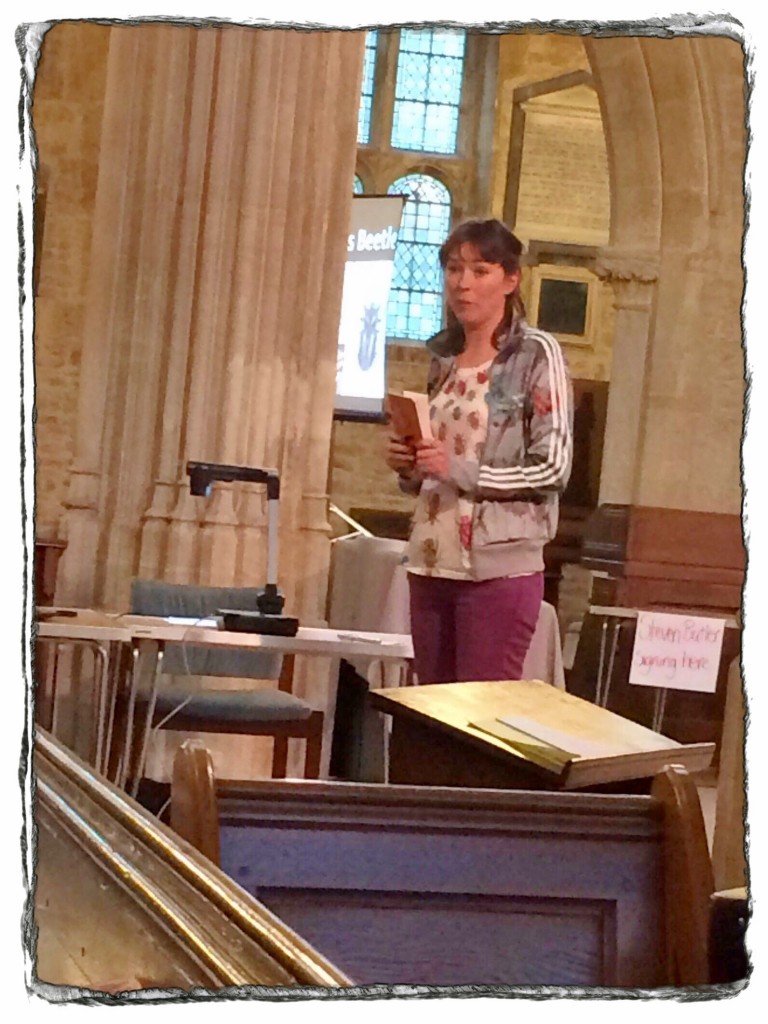 Yes, I caught the moment she said ‘butt’! Ha! Revenge!

It was then the turn of the force of nature that is Steve Cole, author of the Secret Agent Mummy and Young Bond novels. We also discovered that Steve has complete and utter loathing of salad. Especially cucumber. As a child, he invented a legend that cucumbers were in fact vampires just to get out of eating the things. Or was he just spinning a tall tale. You decide… 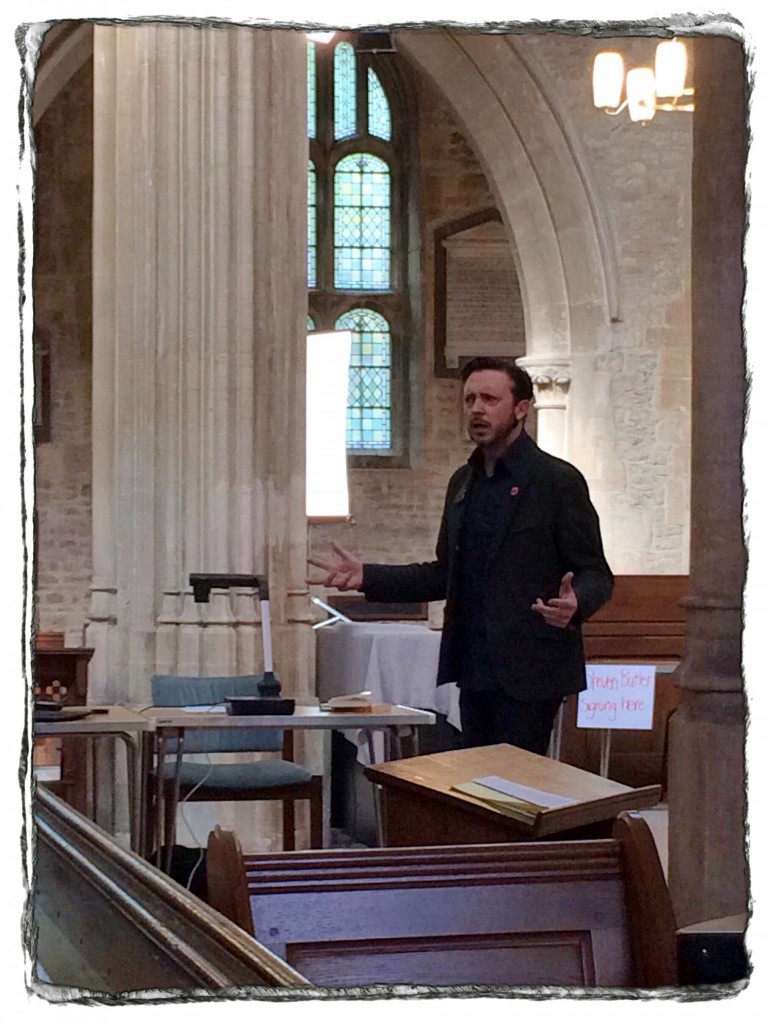 Steve has since captioned this picture as: “Confused man wonders where the congregation’s gone!”

Next up with Katherine Rundell, author of Rooftoppers and The Wolf Wilder (which I’m reading at the moment and it’s stunning!)

Katherine shared secrets of her research, plus the fact that she can cross a tightrope wearing ballet-shoes. This is a skill that I now feel the urge to learn.

Here she is asking the audience to raise their hands if they like fairy stories (well, the kind where brides turn into wolves to eat all the wedding guests…) 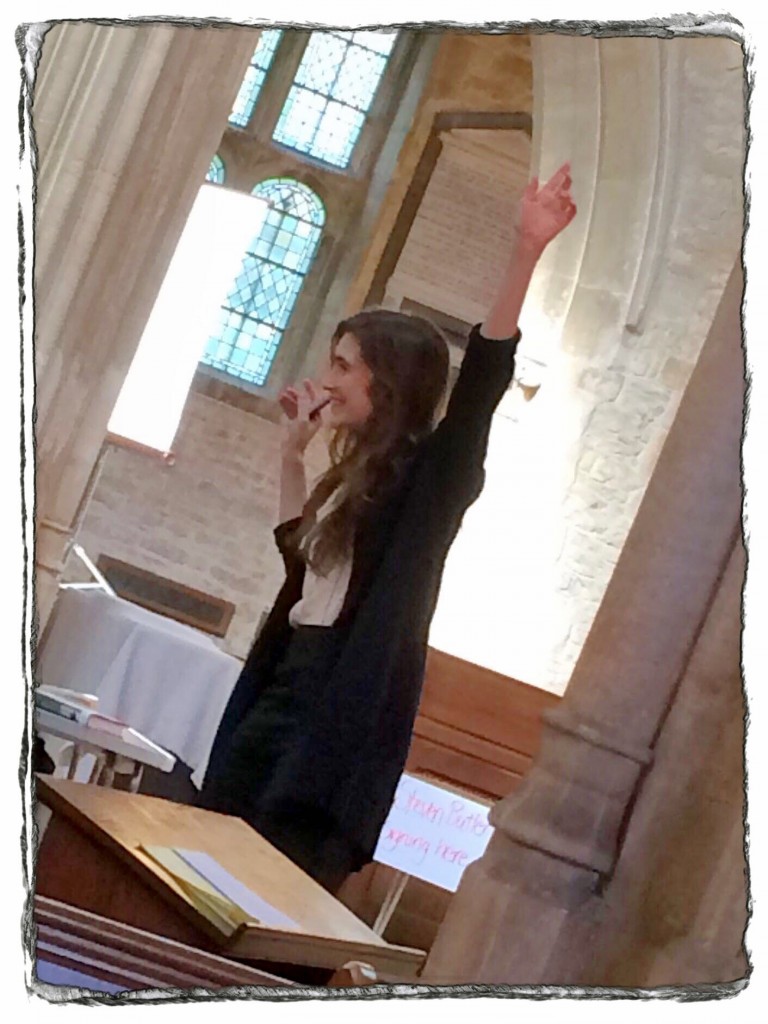 Finally, a writer / illustrator team took to the front, none other than Julian Clary and David Roberts, who have worked together on The Bolds series of books.

Julian told us why he wanted to write about a family of hyenas pretending to be humans in Teddington, while David wowed us with live drawings of the characters. 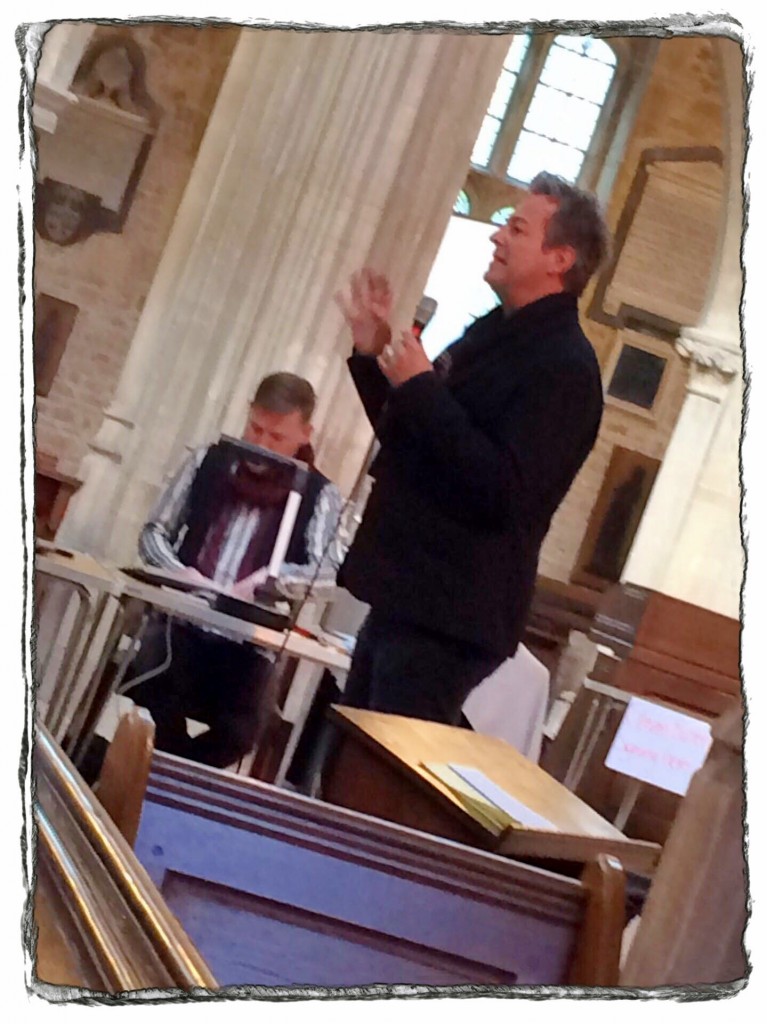 The show done, it was time for the signing with all of our books on hand to be scribbled on, including this beauty… 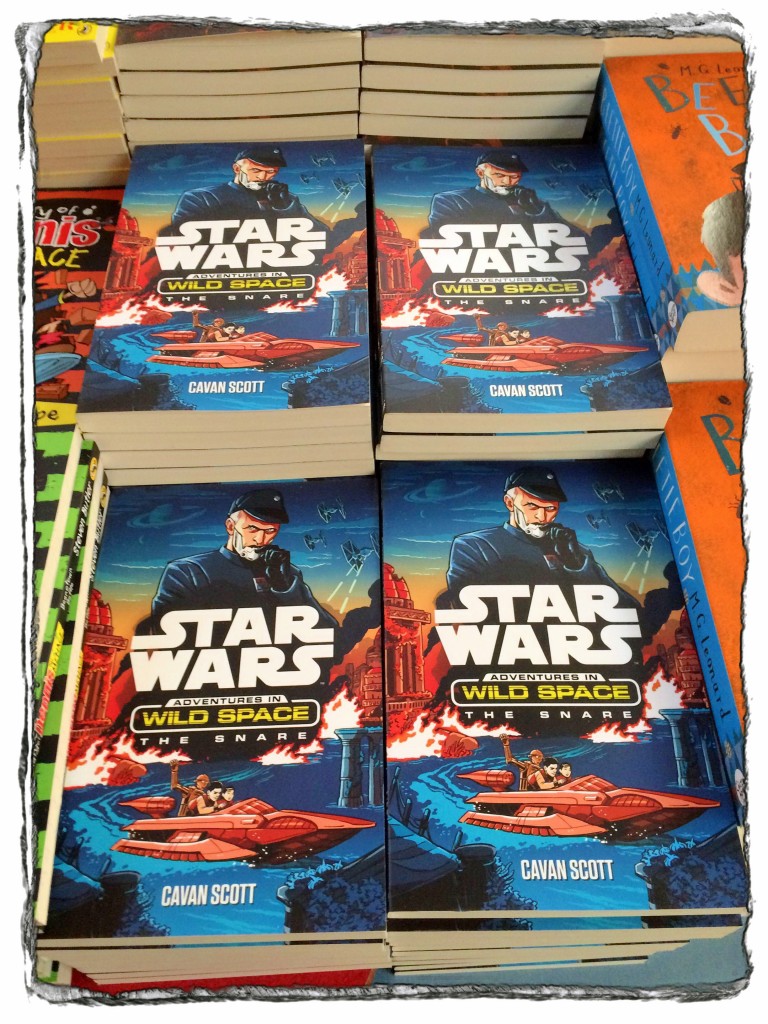 After a quick break for lunch, we did it all again for another 300 kids – and the church had warmed up! Hurrah!

Here’s the entire bunch of us… 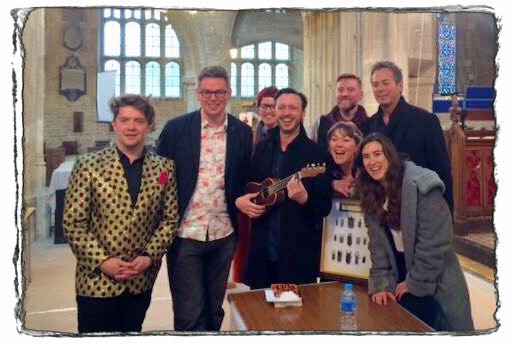 … in what may look like the weirdest wedding photo ever!

Such a fun day, made better by a) also finally meeting Jo Cotterill, who I’ve known online for ages, but never met in person, and b) being fed cakes by Jaffé & Neale. Thanks to everyone at World Book Day, the Jaffé & Neale team, my fellow creators for sharing loads of laughs, and my publicist, Alice Hall for being brilliant!

That evening, the event done, I hot-footed to Pembrokeshire for a wedding. On the way, I checked online to see this…

Yes, my World Book Day book has officially become a bestseller! Whoop! Thanks to everyone who’s picked it up. Let’s hope it gets lots of kids reading!