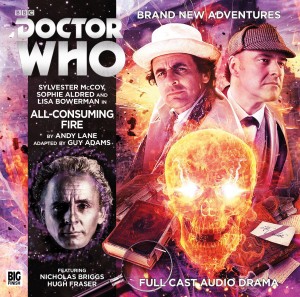 Out today – two Seventh Doctor New Adventures, er, adventures adapted for audio by Big Finish, directed by Scott Handcock​ and produced by me!

Theatre of War – Adapted by Justin Richards, Theatre of War,​ stars Sylvester McCoy, Sophie Aldred and Lisa Bowerman with Miles Richardson as Irvin Braxiatel. The stage is set for a deadly play with sound design and music by Peter Doggart.

Meanwhile, adapted by Guy Adams​ from the novel by Andy Lane, All-Consuming Fire sees the Doctor teaming up with Nicholas Briggs​ as Sherlock Holmes, Richard Earl as Doctor Watson and Hugh Fraser as Sherringford Holmes. This time, sound design and music is by Alistair Lock​.

Go check them out now! The game is afoot!