Wow! What a day yesterday was. First of all, we plunged into our schedule properly. First up was a signing of the Doctor Who SDCC Exclusive with George and the wonderful cover artist Alice X. Zhang. Loads of people came along, we were interviewed for the Doctor Who Fan Show and also discovered that Peter Capaldi had seen and been signing the comic too! Apparently, Jenna fell in love with Alice’s beautiful cover of her, and rightly so.

Then it was off to the Scribe Awards. Neither George and I won our awards, but we had a lively panel discussion moderated by Jonathan Maberry about writing tie-in fiction and getting into the industry.

Away from our own stuff, we went to the Archie Comics panel where they announced a lot of new things including a Riverdale TV show, and popped over to see the new Skylanders game in action. After years of writing for Kaos, I finally met the evil so-and-so.

The rest of the day was spent walking the floor and meeting up with various editors and publishers to talk about secret and exciting stuff. Hopefully, I’ll be able to talk about some of those soon. 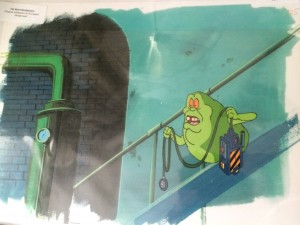 I’ve also been very good and not bought tooooo many things, although I couldn’t resist picking up this: an original animation cell from The Real Ghostbusters. That’s it to the left. Real Ghostbusters was one of my favourite TV shows when I was kid, along with the Richard Starkings-edited UK comic, so it’s fantastic to own a little bit of my childhood. Then, who should I meet but Erik Burnham, writer of IDW’s brilliant Ghostbusters Get Real. If you haven’t picked up issue 1 yet, I can’t recommend it enough.

The evening was a little bit crazy. On Friday, George and I bumped into Greg Grunberg of Heroes fame. Last night, he invited us to see his band – Band From TV – play at a charity fundraiser in aid of Kids For Peace. We even got the red carpet treatment when we arrived:

And Greg’s band rocked too:

It was a great night with a lot of money raised for a great cause.

And now onto Saturday, bound to be the busiest day of the Con. Two signings today, plus the big Doctor Who Comics panel when Titan’s next Doctor will be announced. Check out my full schedule here.