Edie Nugent has interviewed me for Comics Beat about whether Doctor Who is science or fantasy, Marvel Superhero Secret Wars, which Doctor I’d like to write for next and the Ninth’s Doctor dream team. She also surprised me by comparing the first issue of the Ninth Doctor mini-series to Hitchhikers Guide to the Galaxy!

Follow the link to Comics Beat to read the full interview. 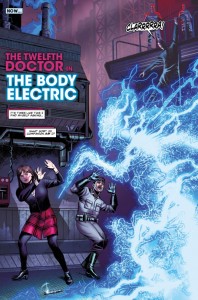 Away from the Ninth Doctor (yes I can blog about other things!!) my buddy George Mann had two pieces of comics news yesterday.

First up, it was revealed that he has written the Twelfth Doctor story for this year’s Free Comic Book Day Doctor Who comic, with art by the multi-talented Mariano Jose Laclaustra. You can check out a preview of their story The Body Electric on the Titan Comics tumblr.

Meanwhile, Bleeding Cool revealed that George has also been working on a comic based on his series of Newbury and Hobbes novels, this time with Dan Boultwood. Head over to Bleeding Cool to read more.

You’re in for a real treat with Newbury and Hobbes. George has been sitting on the news for a long, long time but I’ve had a sneak peek at the story and art and it’s going to be amazing! One to look out for!