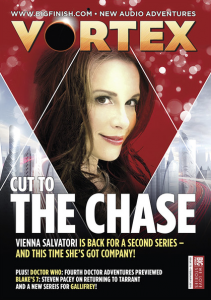 Just a quick post to say that two of my productions pop up in Issue 72 of Big Finish’s free Vortex magazine.

Star Trek‘s Chase Masterson​ and The Hitchhiker’s Guide To The Galaxy‘s Samantha Béart​ talk Vienna Series 2, while Stephen Pacey chats with me about returning to Blake’s 7 as Del Tarrant.

“Vienna is…Ballsy. Ruthless. Amiable. Tricky.
Wait, that was not meant to be an acronym for brat.
Let me try again.
She’s a… Bloody Intelligent Tom-boy. Cheeky. Hilarious.
Oops.”

Meanwhile, on the subject of her new character, Jexie, Samantha says:

“When we first meet Jexie, we find out that she was a very good detective until something went wrong and she got demoted. We find out how and why she got there, but, being Vienna, there’s more to it than you’d expect… It’s going to be interesting how their relationship changes when Jexie discovers Vienna isn’t actually a cop, but an assassin.”

Finally, switching over to the Liberator, Stephen says:

“When I walked out of the TV studio, I thought that was the last I’d ever see of Tarrant – but it still carries on. That’s been a huge surprise over the years, because at theatres there’s still such a strong fan base that come to see you. They are unbelievably loyal, the people that follow it. It’s unlike anythingelse in my career. It’s weird, because you can do other performances – and I hope I’ve done better performances over the years – but it doesn’t capture the imagination of the fans in the way that science fiction does, and it lives on through the fan base. Tarrant just won’t go away.”

You can read all this and more in issue 73. A print edition of Vortex is sent to Big Finish customers with orders, or you can download a free PDF copy by heading over to the BF website.

Plus, in case you missed it, the trailer for Vienna, series two is also available on the site. Go on, have a listen!