So here we are, 31st December 2014! The last 12 months have sped by, and when I sat down to choose some of my favourite moments, I struggled to narrow it down to two or three. I hope you’ll indulge me as I rattle through some of my best bits!

In no particular order, my 2014 highlights included:

SEEING MY GOOD MATE MARK WRIGHT MARRY THE LOVELY PAULA
I couldn’t have been happier standing by Mark’s side as one of his best men. What a fantastic day it was – even if I did try to karate chop him on one of the wedding photos (expertly taken by Happily Ever Captured)!

Mark and I haven’t written so much together this year, but have unlocked some joint acheivements, including writing for David Warner, the publication of Wit, Wisdom and Timey-Wimey Stuff, bringing the first Big Finish Blake’s 7 full cast audios to a close and, of course, writing Daleks.

WINNING THE SCRIBE AUDIO AWARD
Mark and I were as pleased as punchy things to share this shiny award for one of our favourite collaborations, Blake’s 7: The Apocalypse Storm.

Plus, later in the year, DWM readers voted our Ninth Doctor installment of Destiny of the Doctor as the top AudioGo release of 2013 and my Way Back feature as the top article of the year too!

WRITING FOR THE BEANO
This is straight into dreams come territory. I loved the Beano as a kid, and I still adore it today. The seven-year old me would have probably blown a gasket to find out that he would one day write Roger the Dodger, Minnie the Minx, Bananaman, and Gnasher and Gnipper. Cor, as they used to say in the funny papers! 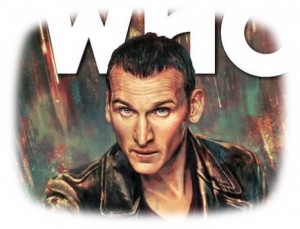 THE NINTH DOCTOR COMIC
I wasn’t just a fan of British comics when I was knee-high to a Nibbler. From the day I first picked up Marvel Super Heroes Secret Wars issue 1, I was hooked on American comics.

Now, I find myself writing for the American market, bringing Christopher Eccleston’s wonderful Ninth Doctor back with a five issue Doctor Who mini-series from Titan Comics.

Yes, yes, I know I’ve wibbled on loads about this recently, but I’m in seventh heaven working with artist Blair Shedd. Or should that be ninth heaven?

Either way, there’s more US comic news to come! Watch this space!

MY RELUCTANT READER TEEN READS STORIES
The response to my stories published by Badger Learning has been amazing, and I even read part of Billy Button at a Bristol Fringe event in May. My first ever public reading!

To say my knees were knocking together as I stepped up to the mic is an understatement, but I had a wonderful audience who were very, very kind.

SNAFFLES THE CAT BURGLAR
2014 saw me pen two new interactive ebooks, both published by Fiction Express. If you forced me to choose, Snaffles the Cat Burglar was probably my favourite of the two – a silly tale of pet pinching, robot rats and flying fortresses.

And the best news is that the fiendish feline is returning for more misadventures in 2015!

BECOMING PATRON OF READING AT AIR BALLOON HILL PRIMARY SCHOOL
Leading writing workshops in schools is always a highlight for me, whatever the year, but becoming a Patron of Reading is special. I can’t wait to get back to Air Balloon for more story-writing fun in the New Year.

And that reminds me – I have a video blog to record for the school. I’d better get cracking!

PATHFINDER LEGENDS
I have had so much fun writing for the Pathfinder Legends audio series, starting with The Skinsaw Murders in June.

The joy of Pathfinder is that:

What’s more, the Pathfinder Legends series is, according to Topless Robot, one of the 21 reasons why 2014 was the Best Year for Tabletop Role-Play Gamers!

So, those are just a few of my magic moments for 2014. Not everything of course. I haven’t mentioned taking part in the Doctor Who Experience Family Fun day, or leading comic workshops with my Beano buddy Wayne Thompson or writing even more Skylanders books.

Whatever you’re doing tonight, enjoy yourselves! Here’s to a happy and healthy New Year!