It’s been while since I did a round up of books wot I’ve read, so here we go… 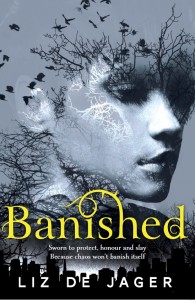 Banished by Liz de Jager took me by surprise as it’s almost completely written in first person present tense. I’ve read short stories told in such a way but never an entire novel and it was a great choice, really bringing Liz’s central character of Kit to the fore and adding an urgency to the action.

Kit is a Blackhart, a member of a family that fights monsters and other supernatural nasties. She’s only recently come to this way of life (which has the advantage of dropping us into the action without another yet variation of a ‘girl discovers the magic world’ origin story) but her new world is about to be turned upside down when she a) discovers a Fae prince being attacked near her ancestral seat and b) said ancestral seat is reduced to rubble by a dragon.

I rattled through Banished, loving the mix of ancient Celtic mythology and kick-ass YA action. Oh, some Lovecraftian monsters to boot. I also had to smile because, knowing Liz, I’m aware of her Guillermo Del Toro obsession (one I share myself – the next book I read after this was the wonderful making of Pacific Rim art book, Man, Machines and Monsters) and couldn’t help but think that there’s a touch of the Del Toro is some of Liz’s imagery and sequences, which is never a bad thing. Indeed when Kit visits the fae camps, I found myself imagining the characters and sets as visualised by Del Toro. Of course this, could just be me stamping my own preconceptions onto her writing, but isn’t that what reading is all about, casting your own movie in your mind as you turn the pages, complete with your own costumes and sets? 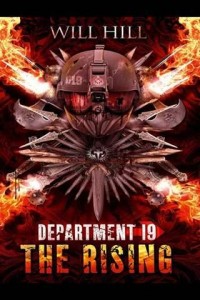 Staying with YA, I also recently read The Rising by Will Hill.

In many ways, this sequel to Department 19 reminded me of The Empire Strikes Back. The world is grimmer, the violence more pronounced, the characters develop in genuinely surprising directions and the conclusion is achingly painful and, most importantly, leaves you wanting more, but fearing what future events might mean for our heroes.

It’s impossible to truly review this book without revealing major, major, major spoilers, but just to say the chapter when the poop hits the spinny thingy was breathtaking. Phenomenal visceral action with an aftermath that is both sensitive and horrific. It’s going to stay with me for a long time.

I’ve other books waiting patiently in my TRP, but it is going to take all of my willpower not to dive straight into volume three of Department 19 instead! 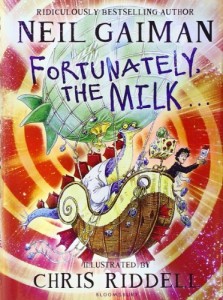 Finally, things took an even younger turn as I read Neil Gaiman’s Fortunately The Milk with my eldest daughter. This was a nervy experience, introducing Chloe to one of my favourite authors. Fortunately Mr Gaiman’s children’s romp absolutely delighted her. The story is simple (ish). A dad goes out for a carton of milk, comes back late and blames it on an adventure with pirates, aliens, time-travelling dinosaurs and volcano gods. It’s wonderfully silly and fast-paced with a timey-wimey plot that feeds back on itself without losing the kids along the way (well. my kid anyway). Plus – and this is always a good thing – there were plenty of laugh out loud moments from Chloe, many coming from Chris Riddle’s brilliant illustrations, including a strangely familiar dad.

So what’s next? Hmmm. Let’s have a look at the reading pile…