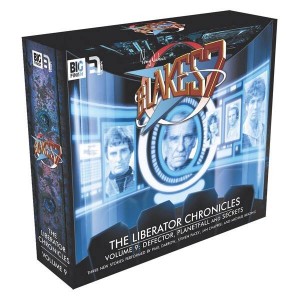 Yesterday, Big Finish released volume 9 of Blake’s 7: The Liberator Chronicles. To celebrate, here are nine facts about the box set.

2. Defector is the second appearance of Steven Pacey in a Big Finish Blake’s 7, reprising his role of Tarrant from the original series. It’s also the first appearance of Tom Chadbon as a member of the Liberator crew, following the events of The Armageddon Storm.

3. The box set wasn’t originally planned as a three parter. We wrote Defector separately and a while later, producer David Richardson asked us if we wanted to write a two-parter to complete the set.

4. Planetfall and Secrets were written before I took over as producer of Blake’s 7 for Big Finish, but they were the first stories I produced, working with director Lisa Bowerman, sound designer Martin Montague and composer Jamie Robertson.

5. The character of Tavac was written with David Warner in mind. We were chuffed to little pieces when he agreed to play the part. Writing for David has been a long-time ambition for both of us. He’s been in everything we love, after all. The Omen, Star Trek, Tron, Time Bandits, From Beyond the Grave (the best Amicus film in my opinion), A Christmas Carol, Doctor Who… The list goes on and on. He was even Superman’s dad!

7. Defector was nearly entitled Assassin, before we realised that there’s already a Blake’s 7 episode with the same name. There was much face-palming that day, I can tell you!

8. Martin Montague came up with a fantastic robot voice for Secrets. Unfortunately, in the end we ended up not using it for various editing reasons. However, the android in question may make a return in a future story, just ‘cos I love the voice so much.

9. You can read an interview with me, David Richardson, Mark Wright and Tom Chadbon in the latest issue of Vortex, available now as a PDF on the Big Finish website.

You can buy Blake’s 7: The Liberator Chronicles direct from Big Finish right this very minute!