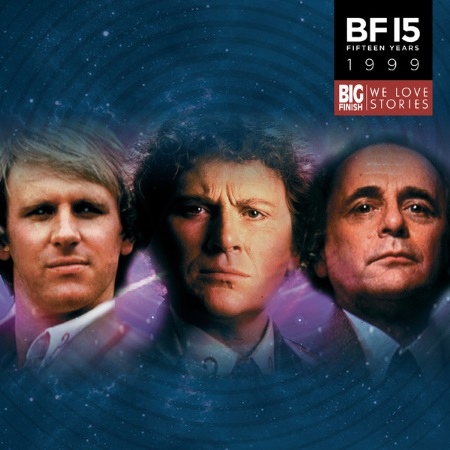 Over the last couple of weeks Big Finish Productions have been celebrating 15 years since their first Doctor Who release, The Sirens of Time.

It’s hard to believe it’s been that long. I still remember Steve O’Brien of SFX getting the review tape (yes tape, as in cassette, when they weren’t retro) and us huddling around his stereo to listen to Sylvester McCoy’s first lines on his return to the TARDIS.

15 years later and Big Finish is still a massive part of my life, so, if you’d indulge me here are five reasons why Big Finish is important to me.

1. It gave me and Mark Wright our big break. That little short story in the Paul Cornell edited Bernice Summerfield and the Dead Men Diaries led on to every bit of fiction I’ve written since, both with Mark and on my own. Paul handed us our contributor copies during a convention in Manchester and I grinned like an idiot seeing our names in print. It had happened before in magazines before but this was different. This was a story! Christmas Spirit by Cavan Scott and Mark Wright. “It’s a good feeling isn’t it,” said the chap sitting beside me, a certain Russell T. Davies. He knows one or two things about stories, that one.

2. They let me write Doctor Who. That was one huge childhood ambition right there. I still pinch myself that I work on a series that meant so much to me as a kid.

3. They gave me my first Producing jobs. It was supposed to be The Tomorrow People, co-producing with Mark, but the licence was pulled before we took over. So we moved onto Paul Magr’s Iris Wildthyme with the wonderful Katy Manning and David Benson. It was a baptism of fire in so many ways, having to learn on the job, but I wouldn’t have changed a moment of it. And now, I have the privilege of producing Doctor Who, Blake’s 7 and Vienna. If I have to pinch myself any more, I’m going to be covered in bruises. Ow!

4. Green room giggles. One of the real joys of working with Big Finish is sitting in the green room, listening to the stories and, as everyone mentions, eating fabulous lunches. Obviously, as a professional, I have to calm my fanboy tendancies, but inside I am jumping up and down in glee, still dizzy with excitement of working with real legends. I believe the appropriate phrase is ‘Squee!’ (Although I’m not sure I can pull it off, much as the time I once instructed someone to drop it like it’s hot!)

5. The people. And there’s the rub, right there. Big Finish is as much about the people as it is the productions. It’s a cliche, but there is a real family feeling to BF. At times its a slightly disfunctional family and there have been a few squabbles along the way, but that’s just life. When I think of Big Finish I think of the mates I’ve made over the last 15 years, people who I don’t neccessary see all the time, but when I do there’s always smiles and a lot of mickey-taking. I won’t start listing them, cos I’m sure to miss some out and then they might come after me with blunt objects.

So there you have it. Apologies if that got a little sentimental at times, but hey, isn’t that what anniversaries are all about. That and cake.

There is cake, isn’t there?