It’s been a while since I’ve blogged about what books I’ve been reading, so here’s a random selection.

I’ve just finished Christopher Brookmyre’s SF thriller, Bedlam. Twisty and turny, this is the tale of a man trapped in a computer game – or should that be multiple computer games – with a touch of Tron chucked in for good measure. Lots of gaming and geek in-jokes, plenty of action and a hi-octane cinematic pace. Now looking forward to dipping into some of Brookmyre’s non-SF stuff.

Earlier in year I also read Will Hill’s Department 19. It’s been on my to-read pile for an age, and I now wished I’d dived in earlier. This is a YA horror that shocks, with compelling characters, plenty of action and lashings of gore.

It’s feels as if Will wrote it just for me – shady black-ops organisations, links with Dracula and Frankenstein and vampires, lots and lots of vampire. Pure unadulterated, bloodthirsty fun, from beginning to end.

The last book I want to talk about was a Christmas present to myself. Guillermo del Toro has been one of my favourite directors ever since I first saw Mimic (although his director’s cut is infinitely better than the movie that originally reached cinemas). I love del Toro’s heightened style of storytelling and his obvious love of monsters. His Cabinet of Curiosities takes us through his inspirations and obsessions, flinging open the doors to Bleak House, del Toro’s wonderfully bonkers shrine to films and fantasy. Who wouldn’t want a house where a giant Frankenstein head welcomes visitors? Or a study where rain lashes against fake windows whenever you have a hankering for dark and stormy nights? Well, my wife I suppose, but del Toro’s bizarre retreat looks like the best man-cave in history, packed with toys, books, comics and mad, movie memorabilia.

But that’s just the beginning of this beautiful book. What follows are pages and pages of del Toro’s wonderfully intricate journals. Here you see del Toro’s ideas take form years before they find a home on the silver screen. The handwritten pages, which are discussed in an extended and intriguing commentary, are little works of art in their own right, every scrap of paper consumed by notes and sketches. We learn about the origins of del Toro’s unique vision, the development of his now-familiar tropes, the struggle of bringing some of his concepts to screen and even del Toro films that may never see the light of day. The result is an infinitely fascinating and inspirational book that I know I’ll be returning to time and time again. 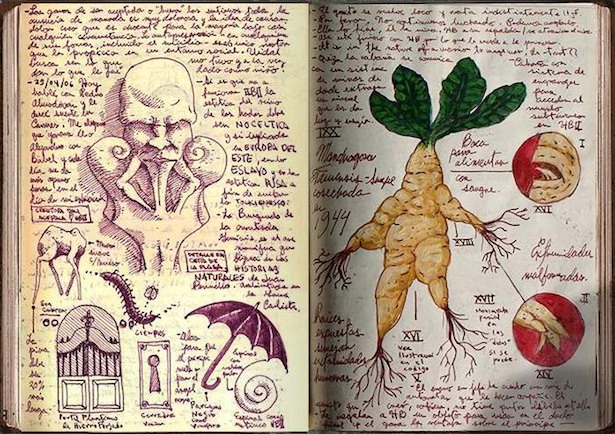 And, after years of making notes on computers, it’s got me carrying a paper journal around again. It’s true what they say – there’s something about the act of writing in a physical book that just gets ideas flowing…

So, what have you been reading recently? Let me know in the comments below!