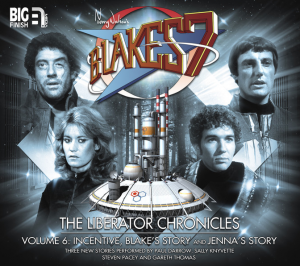 Just a quick note to say that box set six of the Blake’s 7 Liberator Chronicles has been released, including a new story from me and Mark Wright. Blake’s Story tells the previously unknown tale of what happened to Blake when he left the Liberator at the end of the second series.

I’m still quite staggered that we were asked to fill in the blanks between his disappearance at the end of the second series and his reappearance in the very last episode – plus how he got that scar, of course.

We also knew that the story would split fans down the middle. We’re telling a story that has been discussed for three decades. Every Blake’s 7 fan has an idea of what Roj Blake got up to in the years he was away from the Liberator. Sure enough, the reactions to the audio drama have been strong. Some people seem to have really enjoyed it, while others have got quite angry about the choices we’ve made. It’s certainly been interesting seeing the debate raging on such forums as Gallifrey Base, Horizon, and Big Finish. I’ve had to sit on my hands to stop myself joining in, but having a writer drop into a discussion isn’t always a good thing. As we’ve seen in recent months, an author responding to a review, or joining in with a conversation, can cause all kind of problems, especially if the members of a forum or blog think the author is trying to shut down the debate.

Best to stay out-of-the-way and observe from a distance.

Of course, the debate that’s springing up illustrates what I love about the Blake’s 7 characters. Every fan seems to interpret them differently. To some, Blake is an out-and-out hero, to others he’s an extremely flawed individual. What’s your take on the great man? I would love to hear. Leave a comment and let me know.

Of course, there are another couple of fine stories in the box set too. Here’s the info:

Incentive by Peter Anghelides
Starring Paul Darrow as Avon, Steven Pacey as Tarrant and Adrian Lukis as Bracheeni
The Liberator crew are recovering from a Galactic War and searching for their lost members Blake and Jenna. But it’s a search that leads them into terrible danger…

Jenna’s Story by Steve Lyons
Starring Sally Knyvette as Jenna and John Banks as Correl
Jenna’s story is finally told – from her escape from the Liberator during the Galactia War, to her determination to continue the fight against the Federation alone… with the odds stacked against her.

Blake’s Story by Mark Wright and Cavan Scott
Starring Gareth Thomas as Blake and Paul Darrow as Avon
Blake’s story is finally told – from his escape from the Liberator during the Galactic War, to his new life as a troubled, scarred man on a distant rebel world…

Blake’s 7 The Liberator Chronicles Volume 6 is available to buy right now on CD and download.