Do you remember the warehouse at the end of Raiders of the Lost Ark?

I think I walked into it yesterday. There were magical artefacts and everything. OK, so I couldn’t find the Ark of the Covenant, but I did find things that transported me back in time.

Where was I? Area 51? The Bermuda Triangle? The Department C4 archive? Nope, I was in Dundee. Specifically, the HQ of D.C. Thompson.

That’s right – Beanotown. And Dandytown and Nuttytown for that matter too. The warehouse was the art store, deep beneath The Beano offices, rows and rows of files containing the original artwork of every issue of the Beano, the Dandy, the Nutty, the Beezer and more.

I was like a Bash Street Kid in a sweet shop. Everywhere I looked were images from my childhood, plus from childhoods I’d only ever read about in history books. Original Lord Snooty art from the ’40s. Leo Baxendale Minnie the Minx. Unlettered inks of Tin Can Tommy. The colour roughs for the 1981 Beano summer special. Wow!

And when I walked down one row and discovered the original film cans and scripts from the Bananaman animated series, I started to grin insanely. I don’t think I’ve stopped yet.

Why was I there? Well, I’m afraid if I told you that I’d need to feed you to Gnasher (not that he’d eat you – he prefers sausages and posties’ bums).

It’s for a top-secret project I’m working on for Puffin Books and the Beano, a project that has justified all those years I spent poring over Beano Books when I was a nipper. Not that I needed justification back than. I was a child. It was my right to read the Beano. Actually, it was probably my duty!  I still read it today. My favourite strip at the mo has to be the crazy new version of Roger the Dodger. And Bananaman. And… oh there are too many to choose from.

I’ll be able to reveal more nearer the time, but in the meantime there was a moment of pure, wonderful coincidence. On the way to the offices I remembered a series of old Minnie the Minx strips from the early 80s. Every week Minnie would travel from one country to the next, causing mayhem and mischief on the way. I mentioned it to a couple of folk in the Beano offices and although it rang some bells they couldn’t place it. I began to think I may have imagined Minnie’s international wanderings. 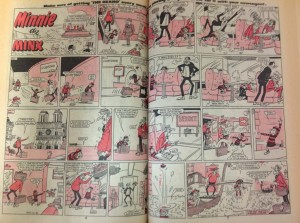 Then, just before we were due to leave, I absent-mindedly picked up a book that contained every issue of the Beano from 1983. I flicked it open to a random page and there it was – Minnie starting her European tour with her long-suffering Dad on a hovercraft. I couldn’t believe it. In fact, I felt a little lump in my throat. Suddenly it was the 16th July 1983 and 10-year old Cavan Scott had just picked up his weekly copy of the Beano. I flicked forward, reading Minnie’s exploits in Austria, Spain and Finland. It all seemed so familiar, even though I’d not seen it in 30 years.

I’m glad I was never without a Beano when I was a kid – and I love the fact that my kids read the exact same characters today. I came home with Dennis catapults for them and Chloe immediately started to work out if she could shoot squashy tomatoes from it like her pointy-haired hero. Whoops! I’m sure people won’t mind being splattered.

Ah, what am I saying? Long live Minnie and the rest of the Minxes and Menaces!

So, what are your memories of the Beano, Dandy, Topper or whatever comics you read as a child? Leave a comment below and let me know.