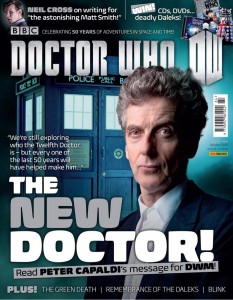 Get yourself some bank holiday reading with issue 464 of Doctor Who Magazine, out now blatant plug fans. Why? Well, not only is there a special mini-message from the new Doctor Peter Capaldi, there’s also a cavalcade of Cavan Scott stuff as well.

Within the issues you will find:

That’s probably quite enough Cav Scott for one issue, thank you very much. If that doesn’t float your boat there’s also an interview with writer Neil Cross, a look back at Remembrance of the Daleks and a mysterious encounter with Colin Baker and some ice. Go on, Jac Rayner, spill the beans – what really happened?

As a note, I’ve seen a lot of folk online puzzling over the fact that the cover doesn’t declare ‘PETER CAPALDI IS THE DOCTOR’. That will come after the regeneration on Christmas Day. Remember, there’s only 122 shopping days until the 12th Doctor…