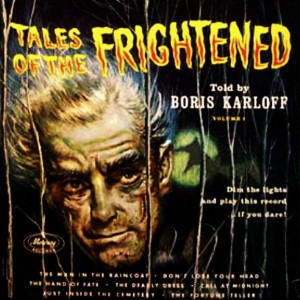 I remember it so well. Wandering into a charity shop on Gloucester Road and flicking through the LPs. There were the usual Michael Jacksons, Five Stars and Fleetwood Macs but then I stumbled on a gold mine. Three spooky, halloween-esque gems. OK, so it was a blazing August morning but I immediately imagined how fantastic these would sound on blustery October nights, listening when the lights had gone off.

The LPs in question were Tales of Witches, Ghosts and Goblins (read by Vincent Price) and Tales of the Frightened volume one and two (with the sublime Boris Karloff). I eagerly handed over my money and hurried home, chuckling to myself like Igor after a particularly successful grave-robbing expedition.

I have loved these albums ever since. OK, now I have them on MP3 but they’re still part of my Halloween rituals. Comfy chills on a cold autumn night. 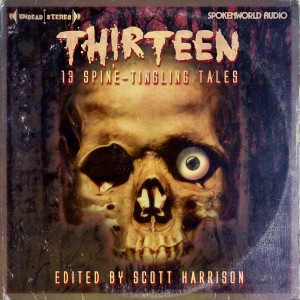 Which is why I was chuffed to little pieces to be asked to contribute a story to Thirteen, a brand new horror audio anthology edited by Scott Harrison. Little did I know I would be in such fabulous company. Kim Newman and Stephen Gallagher? Yes please. Mark Morris and Gary McMahon? Fantastic. And, of course, my old muckers George Mann, Johnny Mains and Mark Wright.

Nestled in this treasury of terror comes my own tale, ‘Visions’ read by Michael Maloney (recently seen in BBC One’s The White Queen). I listened to it yesterday and sound wizard Neil Gardner has done a cracking job – he even picked up that the characters were Bristolians without it being explicit in the text!

Thirteen will be available on Saturday 24th August direct from Spokenworld Audio as a digital download for just £9.99. Just under a tenner for 3 hours and 36 minutes of horror. Not bad at all that.

And best of all, if it’s a success Spokenworld will be looking a producing a series of similar audio anthologies. Here’s hoping.

3 – A Girl, Sitting by Mark Morris read by Jilly Bond

4 – Finding The Path by Kaaron Warren read by Trevor White

6 – Down by Gary McMahon read by Stephen Rashbrook

8 – Half Life by Dan Abnett read by John Banks

12 – One Hit Wanda by Kim Newman read by Samuel West

15 – I Wish by Johnny Mains read by Steven Cree