Big Finish has released the cover of Blake’s 7: The Liberator Chronicles Volume 6, which includes Blake’s Story by me and Mark Wright as well as Jenna’s Story by Steve Lyons and Incentive by Peter Anghelides. I think it’s rather wonderful, don’t you know. 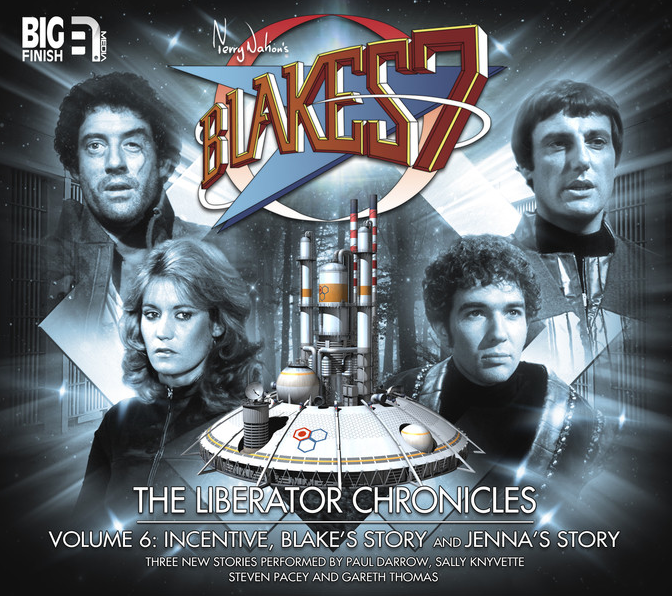 This boxset, as well as re-introducing Steven Pacey as Tarrant, tells the stories of what happened to Jenna and Blake after they left the Liberator at the end of series two. Mark and I were over the moon to be asked to write Blake’s Story, finally explaining how Blake became the man we saw in the last episode of the series – and how he got that infamous scar!

Here’s the blurb for the story:

Starring Gareth Thomas as Blake and Paul Darrow as Avon

Blake’s story is finally told – from his escape from the Liberator during the Galactic War, to his new life as a troubled, scarred man on a distant rebel world…

Unfortunately, we couldn’t make the recording on this occasion, so I can’t wait to hear Gareth and Paul’s performance myself. The boxset is released in November and is available to pre-order from Big Finish.

In the meantime, Mark and I were also recently interviewed about Blake’s 7, Doctor Who, Iris Wildthyme, Skylanders and more over on the Starburst magazine website. Must admit, this was also a bit of an honour. I read Starburst religiously as a child. The idea that I would be interviewed for the magazine, about my work on Doctor Who and Blake’s 7 would have been mind-blowing for my young self. I count myself as very fortunate to be working on such iconic series. You can read the interview here.