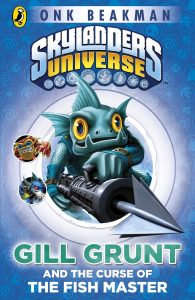 Just nipping in as Gill Grunt and the Curse of the Fish Master is published here in the UK today. This is the second book in the Skylanders Mask of Power series and features the exploits of Gillman Marine Gill Grunt, king of the crabs Wham-Shell and electrifying water dragon Zap. As always, the Skylanders chapter books are written by my, ahem, friend, Onk Beakman.

Together, the Skylanders fight the dreaded pirate Captain Grimslobber and the crew of the Fearsome Fang, journey to the underwater Kingdom of King Scalebeard and face rampaging Cloud Krakens and Electro-Jellies. Woah!

As always the Puffin Book editions feature a special Skylanders head-to-head activity and a sneak peek at the next book in the series, Lightning Rod Faces The Cyclops Queen.

Illustrations are by the fab Dani Geremia, who also provided the pictures for The Machine of Doom.

Now if you’d excuse me, I need to get back to writing book five in the Mask of Power series, which I should be finishing today. What’s this one called and which Skylanders does it feature? Oh, that would be telling…

Gill Grunt and the Curse of the Fish Master is available from Amazon.co.uk (in both print and Kindle editions), Waterstones, W.H. Smiths, iTunes and all good book shops.