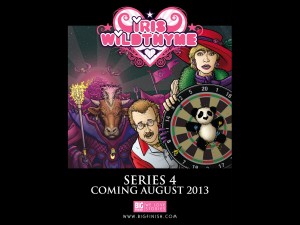 The art, once again by the talented Paul Hanley, is from the cover of the second story of series 4 – Iris at the Oche by Mark Wright. Here’s the blurb for the adventure:

Super, smashing, great! It’s the annual Pondside World Darts Championship. As down-at-heel pub darts player Ted Taylor steps up to the oche, Iris realises that the fate of the entire universe depends on the result of this one game of arrows. What are the calculations streaming through Ted’s mind, why are the bullish Bovians determined to drag a Kent Country Club into a temporal rift and will Panda ever get to enjoy his chicken-in-a-basket in peace? Game on!

It’s a brilliant script which director Gary Russell is casting as we speak, ready for recording in a couple of weeks. I can’t wait to get back into studio with Katy Manning, David Benson and the rest.

Talking about Iris, over at his blog Paul Magrs has been writing about, well, writing The Scarlet Empress, the novel that introduced Miss Wildthyme to the worlds of Doctor Who. I can’t believe it’s been 15 years since it was published. I remember reading it, sitting around a pool in Luxor, Egypt. How very exotic and appropriate for a trip to Hyspero.

She was a character who would be a female counterpart to the Doctor. One who seemed to know more about his own past and future than he did, and one who had the tatty diaries to prove it. One who undercut his Time Lord bluster and called him ‘sweetie.’ A woman who dressed like a homeless drag queen and who travelled the cosmos in a miraculous double decker. She was mysterious, amoral, and possibly sinister. She was the Doctor’s unwanted love interest – his Irene Adler, his Catwoman, his Mrs Slocombe. All rolled into one divine – and profane – package.

You can read the rest of his memories of writing The Scarlet Empress here.

Did you read The Scarlet Empress back in the day? If so, can you remember where you read it?

Leave your comments below…