So, SFX have revealed the new Ice Warriors from Doctor Who series 7B in all their reptilian glory. Personally I think they look pretty ssssssssssensational. True to the original with a nice modern twist.

I’ve always had a soft spot for the Warriors, who first appeared back in 1967. Most Doctor Who monsters were evil, some were good but very few were both. 1972’s The Curse of Peladon saw the Doctor having to face his prejudices when he realised that the Ice Warriors in the story weren’t the bad guys. Like humans, Ice Warriors are capable of great evil but also great good. Probably the most mature race of monsters the original run of Doctor Who ever created – other than perhaps the Silurians. It’s just a shame that we’ve had to wait nearly 40 years for them to make their return, although they’ve been a staple in Doctor Who novels and comics for years (even turning up in IDW’s Doctor Who Prisoners of Time this month). 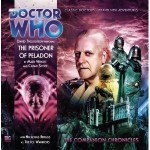 Mark and I were given the chance to play with the Ice Warriors in the Doctor Who Companion Chronicle The Prisoner of Peladon. A sequel to the original story, Prisoner sees Martian refugees seeking sanctuary on Peladon after a civil war has raged over New Mars. The Doctor arrives to find asylum seekers are being killed in the Ice Warrior camps. But who is behind the vicious murders. The single CD, performed by David Troughton (with Nick Briggs as the Ice Warriors) is still available blatant-plug fans.

The return of the hissing Warriors in the Mark Gatiss-scripted story is just another reason to be excited about the next batch of Doctor Who adventures which kick off at the end of the month. Ice Warriors on a submarine? Yes please.

So, we’ve had Daleks, Cybermen, Sontarans, Silurians and Ice Warriors – which classic Doctor Who monster should be given a 21st Century makeover next? Leave your comments below…