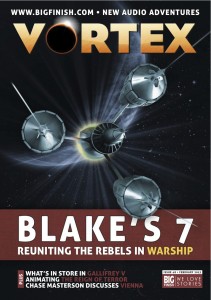 The latest issue of Big Finish’s free PDF magazine is out now and sees Blake’s 7 producer David Richardson preview The Armageddon Storm, the three-part adventure written by me and Mark Wright and out this month.

I wanted to make this one something of an event – we had Del back, and he deserved a big story. So I gave the writers, Mark Wright and Cavan Scott, a brief of ‘Blake’s 7 meets 24’. An action thriller set against a ticking clock with high stakes. They went one further and gave me a massive blockbuster about a Federation superweapon that annihilates whole worlds.

You can read more of David’s preview – plus an interview with Peter Anghelides, writer of Big Finish’s first full cast Blake’s 7 audio, Warship – by downloading the issue 48 of Vortex.