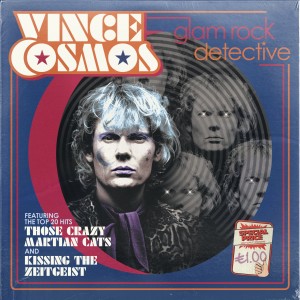 As one of the producers of Big Finish’s Iris Wildthyme series, based on characters created by the wonderful Paul Magrs, I’ve been looking forward to this for a while – Vince Cosmos: Glam Rock Detective, an original audio series written by Paul himself and produced by Bafflegab Productions (of the Scarifyers fame)

It’s 1972 and Poppy Munday has headed down to the big smoke to make her fortune. Well, fortune might be stretching it a bit. She’s headed down south to stay with her cousin, Trish, and to try to get a job. Whatever happens, life will surely be more exciting in London that up North with her Mam. After all, London is home to glam rock sensation and love of Poppy’s life, Vince Cosmos.

What Poppy gets is a batty landlady straight out of a 70s sitcom, a sinister dwarf neighbour and a plot to assassinate Vince. It’s all very Paul. His love of the decade that style forgot shines through, making you nostalgic for a time that is at the same time dowdier and more glamorous than our own. Lauren Kellegher makes for a fantastic narrator as naive and awkward Poppy and, when he finally arrives on the scene, Cosmos himself – played to perfection by Julian Rhind-Tutt – channels Bowie at his height. Pretentious, achingly arch and spangly to the extreme. If Bowie was the man who sold the Earth, Cosmos is the man who saves it.

With a typically brilliant audio production from Bafflegab, this is hopefully the beginning of many extra-terrestrial adventures for Cosmos and co. It’s great to see a production company pushing out with original series so if you’re a fan of fun sci-fi romps or glam rockers, please support them by buying this first release. You won’t regret it. Here’s hoping that the exploits of Vince Cosmos prove to be a long player, with many more out-of-this world adventures to come.