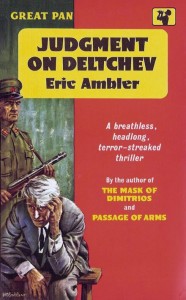 A couple of weeks ago I asked Twitter for some suggestions of good 1950s thrillers. Jeremy Duns, author of the Paul Dark thrillers suggested I try Eric Ambler. I was in Bristol Central Library when his tweet came through so went straight to the thriller section and found Judgement on Deltchev.

Foster is a playwright who, during a bout of writers block, is given the opportunity to travel to an unnamed Eastern European country and report on the trial of its deposed leader, Yordan Deltchev. Even though he’s no newspaper journalist Foster takes the job, thinking it a welcome distraction. After all, how difficult can it be? Stay in a nice hotel, attend the trial, submit the report.

Or not, as it turns out to be.

This is my first Eric Ambler but I doubt it’ll be my last. While some of the political detail slows the pace down at first, it’s a taut thriller that drives you forward. No character can be taken on face value and Ambler pulls off some cunning tricks to keep you reading. Was particularly fascinated by his use of first person narrative. By recounting the story in the first person – and making it obvious that Foster survives – a lesser author would have sacrificed any sense of jeopardy. Ambler does the complete opposite. He builds a sense of dread that doesn’t let up until the end. Foster may survive but to what cost?

Plus, there’s Foster himself. This is no James Bond, no superman. Foster is a true everyman –, a decent if naive fellow who is undone by his curiosity. He is out of his depth and reacts to danger as you and I would – with real fear. If 007 is the man who men want to be, Foster is the man we probably really are. He’s not been trained for all this and probably should never have taken the assignment in the first place – all of which ramps up the tension.

Above all, Judgement on Deltchev has a timeless ring of truth. The novel may have been published over 60 years ago, but you could believe it happening today. It’s also proof that you don’t need a conveyor belt of corpses or seamy love affairs to keep the reader hooked. You just need a world simply and vividly brought to life.

Best of all, I’ve read that this isn’t even considered one of Ambler’s best novels. I need to dig out some more.

In the meantime, the decision is now what to read next. Stick with some crime and espionage or switch genres? Decisions decisions…