Last night, I had the pleasure of watching a brand new production of  Arthur Conan Doyle’s The Hound of the Baskervilles – a production with a distinct difference, as this excerpt from the programme suggests:

Let your spine tingle and your goosebumps grow as you enjoy this beastly tale with Sherlock Holmes as you have never seen her before.

Yes, you read that right. In Bruce Fellows’ fresh adaptation, staged by Brass Works Theatre, Mr Holmes is actually Miss Holmes. This version of the Great Detective is a woman forced to dress as a man to be taken seriously in Victorian society. To further the gender bending, ‘Sherlock’ still manages to indulge her feminine side by performing as a music hall female impersonator. It sounds surreal but works perfectly.

More role reversal takes place as Henry Baskerville becomes Henrietta, a change required to even out the number of female and male characters for the cast of four. Ayvianna Snow plays the feisty American heiress who, in this retelling, provides a love-interest for Martin Whatley’s ever-so-bumbling Watson. A quick change of accent also sees Snow becoming the tragic Beryl Stapleton and, thanks to a sinister cloak, villainous Hugo Baskerville. Boo! Hiss!

David Cole takes on the triple-roles of Doctor Mortimer, Barrymore and Stapleton, throwing himself into the part of the delightfully campy villain with obvious relish. His insane cackle has to be heard to be believed!

Holmes herself is played by co-director Jasmine Smart, performing the central role with a twinkle in her eye and a knowing smile on her lips. She also belts out music school numbers with aplomb as Sherlock’s alter-ego. If you ask me, more Holmes thrillers should kick off with a rousing rendition of ‘Daddy Wouldn’t Buy Me A Bow-Wow’. All together now…

The Mystery of the Hound of the Baskervilles runs at Brass Works Theatre in Warmley, Bristol, until January 5th.

My own take on the Great Detective appears in The Encounters of Sherlock Holmes,
edited by George Mann and published by Titan Books next month. Pre-order your copy now. 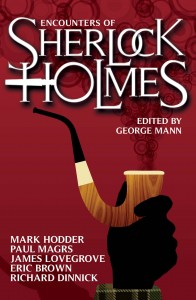