Just got back from a great afternoon at Oakfield Academy in Frome where I talked to Year 8 about writing, Doctor Who and Skylanders.

They were a brilliant bunch of kids, who asked some really good questions. My favourite was “you’ve told us which book took you the longest to write, but which did you find hardest and why?” Really made me think.

The first question was also a classic – “How much money do you make?” Straight to the point, that one!

The afternoon was split into two sessions and as I finished talk number two children from the first one came back and presented me with over 20 thank you letters and cards, the majority of which were Doctor Who inspired. I absolutely loved them. 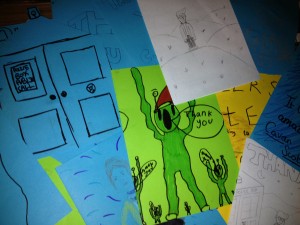 I especially liked the card drawn by Emily from class 8P, with its rather stern-looking female Doctor. She says inside:

Thank you so much for coming and giving such an inspiring talk.

Do you think there’s any hope that Doctor Who might turn into a woman for a series? 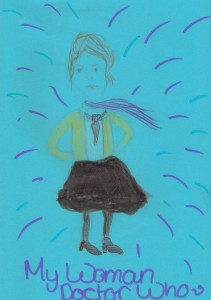 Well Emily, a lady Doctor is an idea that’s been suggested before and, as the Doctor revealed himself in The Doctor’s Wife, he once had a Time Lord friend who went from being a man to a woman in one of his/her regenerations, so you never know. Who would you choose to play a woman Doctor Who?

Thanks to the teachers and pupils at Oakfield Academy for making me so welcome.

If you’d like to book me to come and talk to your school, why not head over to my Start the Story Author Profile so see what I can offer?