Last week, I was tagged by steampunk wizard Jonathan Green as part of The Next Big Thing blog chain, so this week it’s my turn to answer the ten questions before passing the torch to five other writers who will be doing the same next Wednesday. 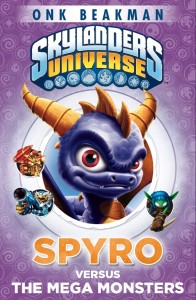 I’ve chosen to focus on something different from a lot of the books looked at through The Next Big Thing – my next licensed chapter book aimed at 9-11 year-old readers.

1. What is the working title of your next book?

Skylanders: Spyro verses The Mega Monsters, the first in The Mask of Power series, written under the pen name of Onk Beakman.

2. Where did the idea come from for the book.

The Skylanders books are based on the game franchise of the same name. I’d already written The Machine of Doom, a standalone chapter book (as well as an Annual and a Quiz Book) and the lovely folk at Penguin asked me if I could work up plans for a series of eight books, each focusing on one particular Skylander. In the game there are eight elements – Fire, Water, Air, Earth, Magic, Tech, Life and Undead – so it seemed logical to base each on one of the elements too.

I also wanted kids who pick up the book to recognise the format, so I based the series around a quest, much like the game itself. The Skylanders would have to be searching for something, but what would it be?

3. What genre does your book fall under?

Fantasy, with more than a pinch of comedy. If you’ve played Skylanders, you’ll know there are dragons, wizards, monsters, zombies, ghosts and sheep – lots of sheep. In Spyro versus The Mega Monsters there are also some pretty neat robots too. 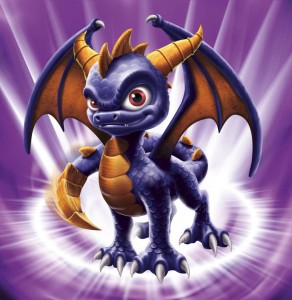 4. What actors would you choose to play the part of your characters in a movie rendition.

I think Spyro would have to play himself. He’s that sort of dragon.

5. What is the one-sentence synopsis of your book?

Giant monsters are rampaging all over Skylands – stupendous sheep, colossal creepy crawlies and freakishly huge frogs. But the Skylanders aren’t the only ones trying to stop them – there’s a new, rather surprising, hero in town.

(OK, that’s more than one sentence but you get the idea!)

6. Will you book be self-published or represented by an agency?

7. How long did it take you to write the first draft of the manuscript?

The first draft took four days, but then, as with all licensed work, there was a long process of sending it back and forth to Activision (who own Skylanders) for their comments and suggestions. 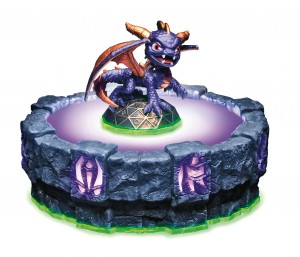 8. What other books would you compare this story to within your genre?

That’s a tough one as Skylanders is a pretty unique world. Skylands is a mixed-up place where standard fantasy elements are turned on their head. It’s full of peril and jeopardy but has a real sense of humour. My hope is that Skylanders fans won’t see any difference from the Skylands of the printed page and the Skylands they explore on their games console.

9. Who or what inspired you to write this book?

Well, as a licensed work I was approached by Penguin. However, when approaching a book like this my inspiration is to write the best possible licensed fiction I can. I’m a true believer in the power of tie-in fiction. It’s all too easy to be snotty about books based on films, TV or games, but the cold, hard fact is that not every kid loves reading. Some children are only attracted to books based on their favourite characters, whether that’s Spider-Man, Doctor Who or, indeed, Skylanders.

The hope is that they’ll enjoy the book and want to read more. That’s why I take as much care on my licensed work as my  own characters. I want them to be exciting windows into the world of books.

I think it’s summed up in this email I recently received from a parent:

My 8-year-old daughter is a HUGE Sypro fan.  She received The Machine of Doom on October 26, 2012 and began reading it on October 28th.  It’s now Halloween and she is done with the book.   She’s never read a book that fast before!   Thank you so much for bringing these characters to life in a chapter book fashion.  We can’t wait for the next book!!!!!!!

I was smiling for days about that! The next day I received another email to say that she’d started reading it again.

10. What else about the book might pique the reader’s interest?

Oooh, I don’t want to give too much away. All I will say is that it’s the first part of a thrilling story that will see the Skylanders facing a threat from the distant past – a threat that puts their very future in doubt.

So, those are my answers. Now time to tag five other authors to take their turn to answer questions about their Next Big Thing:

MARK WRIGHT
Mark has been my writing partner for over ten years now. We’ve written audios, novels and short stories together for the worlds of Doctor Who, Blake’s Seven, Iris Wildthyme and Highlander. We’re currently working on a non-fiction book together and Mark has some very exciting solo projects on the go, as well.

ANNE LYLE
I adored Anne’s first book, the Elizabethan fantasy The Alchemist of Souls and can’t wait for the second in her trilogy, out this December from Angry Robots. Anne has also written a fascinating article about writing historical fiction in the Winter edition of the BFS Journal which I’m compiling at the mo.

GUY HALEY
I’ve know Guy for more years than I care to remember. We first met when we both worked for Future Publishing, Guy on SFX and me on T3. Guy writes stonking SF as well as Warhammer and his blog is always worth a visit.

SCOTT HARRISON
Scott is the editor of Resurrection Engines, a collection of Steampunk short stories that includes my very own retelling of Snow White (out in December, shameless plug fans). He’s also the writer of the second Blake’s 7 novel from Big Finish. Ahead, standard by 12.