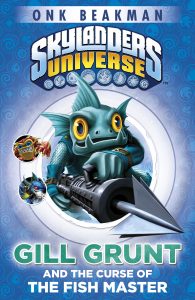 Penguin have just sent me the cover to the second book in the Skylanders Mask of Power series. Hitting bookshelves on 4 April next year, the new follow up to Spyro versus the Mega Monsters features the underwater exploits of Gill Grunt and his fellow Water Skylanders Zap and Wham-Shell as they face The Curse of the Fish Master. Here’s the official blurb:

As sea creatures gang up on the landlubbers of Skylands and the mermaids of Last Chance Cove abandon their underwater kingdom, Gill Grunt embarks on an incredible adventure. From the pen of Onk Beakman, based on the smash hit Skylanders video game, Gill Grunt and the Curse of the Fish Master is the second novel in the hilarious, enthralling Mask of Power series.

Gill’s upcoming adventure will be available from all good bookshops, including Amazon.

Talking of which, I was chuffed to notice that the Skylanders 2013 Annual, which I wrote, is currently 47 in Amazon’s top 100 books and 13th in the Children’s bestsellers. Whoop!