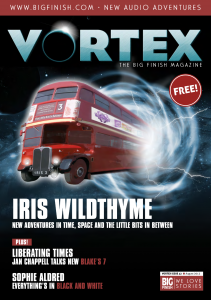 The new issue of Big Finish’s Vortex is out now featuring a couple of projects myself and Mark Wright have been involved with.

First up is the third series of Iris Wildthyme. Iris and Panda are back next month with a boxset of three adventures from yours truly, Guy Adams and George Mann. Get your pre-orders in now.

Originally we’d hoped to have Iris answer your questions on the CDs themselves, but due to technical difficulties beyond our control it wasn’t to be. Instead our cream of the crop are printed in Vortex, as dictated to Paul Magrs, Iris’s very own creator. You’ve got to love that cover too – complete with a slightly new number for Iris’s bright red celestial omnibus.

There’s also a couple of mentions of The Armageddon Storm, the three-part adventure Mark and I have written for Big Finish’s Blake 7 line. 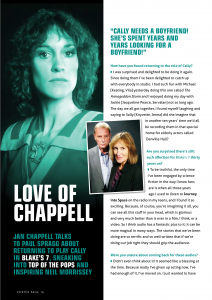 As readers of this blog will know, the three-CD adventure stars Michael Keating as Vila, Jan Chappell as Cally and Paul Darrow as Avon alongside Tom Chadbon returning as Del Grant.

This month’s Sneak Previews and Whispers section focusses on Armageddon while elsewhere in the issue Jan Chappell gives away a few hints about the trilogy in her interview.

Asked how she would like to see Cally develop, Jan says:

She could be anything really! Everybody is all sorts of different things, aren’t they? In [The Armageddon Storm], you think, ‘Ooh, that’s a new dimension, she’s really trying to be funny there’, because Cally didn’t really try to be funny very often. It’s fun discovering that.

Find out more about Iris Wildthyme series 3 and the ongoing adventures of Blake’s 7 by downloading your copy today! The only thing it won’t tell you is what infernal horror this lot was looking at when this picture was taken… Any ideas?