Blake’s Seven: The Forgotten, by my good self and my writing partner Mark Wright is now at the printer. We’ve been incredibly pleased with the way that the novel has gone down at Big Finish. A few days after we submitted the first draft the following tweet appeared on the Big Finish feed:

Just reading text of our first Blake’s 7 novel, The Forgotten – out in May. Great stuff, Mark and Cav!

So now we wait for the first copies to get back from the printers.

In the meanwhile, The Forgotten hasn’t been our only brush with the Federation. Last Saturday, Mark and I were guests at Valiant 3, a Doctor Who convention organised by the lovely chaps at Fantom Films. It was a busy day signing autographs, chatting on panels and hanging out with a gaggle of Who stars including Come Dine With Me champion and star of our very own Project: Twilight, Colin Baker.

There was another guest who we just had to nab for a photo opportunity – Supreme Commander Servalan herself. Here’s the result: two chuffed  writers meeting Jacqueline Pearce, star of Blake’s Seven and one of my favourite Hammer horrors, The Reptile, 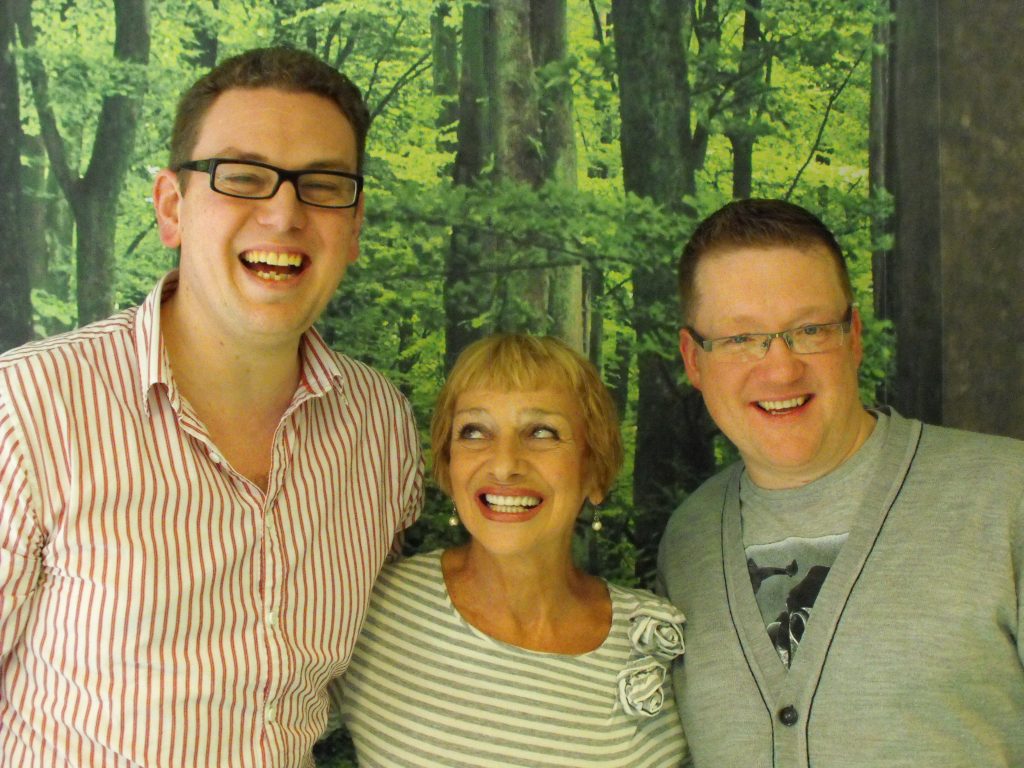 Jacqueline’s the one in the middle, in case you were wondering.

Our impromptu photo shoot was spied by fellow Valianter and creator of Iris Wildthyme, Paul Magrs, who says this on his blog:

It was lovely as ever to see Mark ‘n’ Cav – writers and producers of the Iris and Panda audio series. I’ll never forget them having their photo taken with Jacqueline Pearce – looking like two over-excited schoolboys next to Servalan, against a mural of what looked like a very florid alien planet. Amazing, really, to be having your coffee and sandwiches while Servalan breezes through the room, looking for somewhere to have a ciggy.

Two over-excited schoolboys? Who? Us?

(Thanks to Jeremy Hoad for the photo)