Time for a quick round up of my latest features: 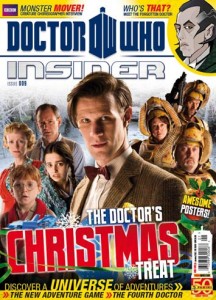 The latest issue of Doctor Who Insider includes three features by yours truly. ‘The Flip Side’ interviews the cast and crew of Big Finish’s The Fourth Wall about the Sixth Doctor’s headstrong new companion, Flip Jackson while ‘Who’s that Guy?’ lifts the lid on Doctor Who’s explosive new Adventure Game, The Gunpowder Plot.

Meanwhile, in this month’s ‘Audio Insider’, I talk to Jason Arnopp about his new Eighth Doctor audio drama, Army of Death and Anneke Wills about returning to the role of Polly in The Five Companions.

In the interview. I asked Anneke if she’s ever consider reprising the role on the TV series. She replied:

“If the powers that be at the Beeb asked me to come back on the TV show I’d have to do it – but I hope they don’t. High definition wrinkles? I think we should keep the mystique of Polly intact!”

Another one of my Country Tales appears in the latest issue of Countryfile Magazine. This month, The Griffins of Huntingtonshire tells the sobering tale of a drunken farmer, a foolish oath and creatures from the depths of hell.

And in this week’s Nitro, Nick Nitro and Booster face a trio of mutant Christmas tree with only a bucket of sprouts to save the day.