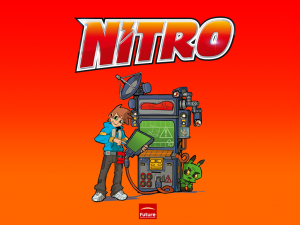 The latest issue of Nitro – the number one boys’ mag for action and adventure – is out right now, featuring another of my Nick Nitro and Booster comic strips.

For those not in the know, the strips follow the adventures of one boy and his perpetually parping puppy. They’re always finding themselves in scrapes that only Booster’s titanic trumps can get them out of. Before writing this strip I never knew there were so many words for farting!

In recent months, Booster’s botty burps have managed to see off invading LEGO aliens, the Sheriff of Nottingham and a bunch of confusing clones. In this issue’s strip – Bite Club – our heroes face a blood-thirsty trio of vampires.

Nitro is available from all good newsagents and also from Apple’s Newsstand App.

Kid’s stuff has been dominating my work this November with lots of exciting projects on the go – none of which I can talk about right now, but they include an exciting pitch that revolves around one of the favourite toys of my childhood, a brand new comic strip and (cue fanfare) a new childrens’ storybook for Penguin books. All will be revealed soon…